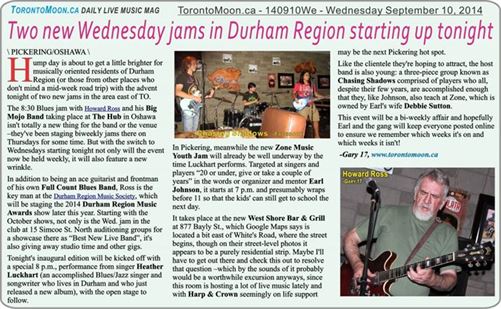 Hump day is about to get a little brighter for musically oriented residents of Durham Region (or those from other places who don’t mind a mid-week road trip) with the advent tonight of two new jams in the area east of TO.

The 8:30 Blues jam with Howard Ross and his Big Mojo Band taking place at The Hub in Oshawa isn’t totally a new thing for the band or the venue –they’ve been staging biweekly jams there on Thursdays for some time. But with the switch to Wednesdays starting tonight not only will the event now be held weekly, it will also feature a new wrinkle.

In addition to being an ace guitarist and frontman of his own Full Count Blues Band, Ross is the key man at the Durham Region Music Society, which will be staging the 2014 Durham Region Music Awards show later this year. Starting with the October shows, not only is the Wed. jam in the club at 15 Simcoe St. North auditioning groups for a showcase there as “Best New Live Band”, it’s also giving away studio time and other gigs.

Tonight’s inaugural edition will be kicked off with a special 8 p.m., performance from singer Heather Luckhart (an accomplished Blues/Jazz singer and songwriter who lives in Durham and who just released a new album), with the open stage to follow.

In Pickering, meanwhile the new Zone Music Youth Jam will already be well underway by the time Luckhart performs. Targeted at singers and players “20 or under, give or take a couple of years” in the words or organizer and mentor Earl Johnson, it starts at 7 p.m. and presumably wraps before 11 so that the kids’ can still get to school the next day.

It takes place at the new West Shore Bar & Grill at 877 Bayly St., which Google Maps says is located a bit east of White’s Road, where the street begins, though on their street-level photos it appears to be a purely residential strip. Maybe I’ll have to get out there and check this out to resolve that question –which by the sounds of it probably would be a worthwhile excursion anyways, since this room is hosting a lot of live music lately and with Harp & Crown seemingly on life support may be the next Pickering hot spot.

Like the clientele they’re hoping to attract, the host band is also young: a three-piece group known as Chasing Shadows comprised of players who all, despite their few years, are accomplished enough that they, like Johnson, also teach at Zone, which is owned by Earl’s wife Debbie Sutton.

This event will be a bi-weekly affair and hopefully Earl and the gang will keep everyone posted online to ensure we remember which weeks it’s on and which weeks it isn’t!