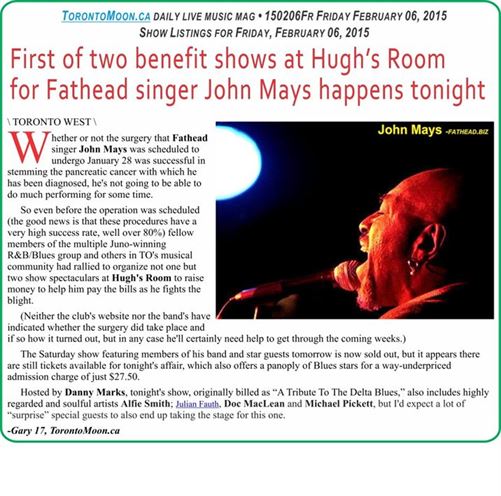 Whether or not the surgery that Fathead singer John Mays was scheduled to undergo January 28 was successful in stemming the pancreatic cancer with which he has been diagnosed, he’s not going to be able to do much performing for some time.

So even before the operation was scheduled (the good news is that these procedures have a very high success rate, well over 80%) fellow members of the multiple Juno-winning R&B/Blues group and others in TO’s musical community had rallied to organize not one but two show spectaculars at Hugh’s Room to raise money to help him pay the bills as he fights the blight.

(Neither the club’s website nor the band’s have indicated whether the surgery did take place and if so how it turned out, but in any case he’ll certainly need help to get through the coming weeks.)

The Saturday show featuring members of his band and star guests tomorrow is now sold out, but it appears there are still tickets available for tonight’s affair, which also offers a panoply of Blues stars for a way-underpriced admission charge of just $27.50.

Hosted by Danny Marks, tonight’s show, originally billed as “A Tribute To The Delta Blues,” also includes highly regarded and soulful artists Alfie Smith; Julian Fauth, Doc MacLean and Michael Pickett, but I’d expect a lot of “surprise” special guests to also end up taking the stage for this one.

6> First Friday with Sandi Marie & Under The Bus @ Grossman’s, 379 Spadina Ave., TO ~Roots/Country 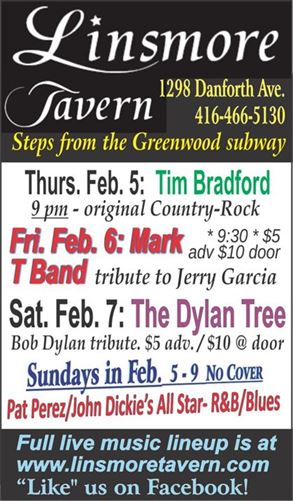