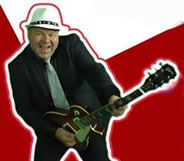 We told you a little bit about Enzo Simone and the Surf Riders band just about a year ago when the group briefly took over a Sunday jam at a bar in Pickering.  That didn’t last too long, in part because Enzo is a pretty busy guy [see details below] and he ended up handing the event over to another anchor, who also didn’t stay very long.

Eventually, in January of this year, a fourth outfit tried to make a go of the event at West Shore Bar and Grill, but once again they didn’t last.  That maybe shouldn’t be surprising, since, as we told you then, the original group that ran the event successfully for a year-and-a-half actually abandoned the room to move their jam elsewhere.  (The club does virtually nothing to support its occasional live music, having no functional website and only occasionally bothers to update its Facebook page with sporadic last-minute posts a few hours before shows take place, making it basically useless.)

But back to Enzo, who tonight gets to perform at Linsmore Tavern in east TO —a club which promotion-wise is the exact opposite of West Shore.  His Surf Rock group, built around his prodigious instrumental guitar prowess, appears along with two other acts for the weekly Indie Night in the room at 1298 Danforth Ave., steps from the Greenwood subway station.

The Linsmore has figured out what it takes today to be successful utilizing live music as a draw, which the old-school bar does five or more nights every week.  All in all, this room, under music maestro, Ryan Mangano (whose father Basil has owned the room for over three decades of its nearly 82-year history)  does just about everything right,

Ryan covers all the social media promotional bases.  He has a fully up-to-date website with an easy-to-read and informative calendar; a Facebook page that already has the full September schedule in prominent view; a Facebook group where updates are regularly shared; and he is relentless in nearly daily posting detailed and enthusiastic bios and descriptions of the performers that play in the room to a wide variety of Facebook groups —always remembering to include the start time and covers (when there is one).

The club also sports an outside marquee that is kept up to date, has posters of upcoming shows all over the place and even features an electronic scrolling screen with visuals of the forthcoming acts along with bar specials, etc.  The room also features a house PA and decent show lights (though someone needs to teach bar staff how to aim and adjust them so that reflections from the window behind the stage don’t create a piercingly blinding shine that makes it impossible to see the performers faces and becomes unbearably irritating after half an hour of focusing on the show).

There’s no food (though you can order from the bistro next door via the bar) and no debit or credit card capability (an ATM in the back, however) but drinks are very reasonably priced and it’s a place that’s unpretentiously welcoming and relaxed enough that you don’t mind getting a little sauced.

The Indie Tuesdays event sees attendance go up and down, as all such nights are bound to do.  But sponsorship of the event by Steamwhistle Breweries means draught pints are available for just $5 while support from a TO music store, a satellite radio network and a promoter who books the acts means not only is there no cover but with so many people helping spread the word most Tuesdays it’s a really good musical experience with an enthusiastic audience and artists who are truly trying to make their mark.

Things kick off at 8 and Enzo’s band takes the stage for the final hour at 10 p.m.  In addition to his Surf Rock ensemble, Simone is a veteran of the musical scene who is also a Blues performer (he’s one half of the Toronto Blues Brothers Tribute act) and is equally adept at Rock and Jazz.  In the Surf genre he has found a way to infuse the best of both elements to the degree that his cover version of Dick Dale’s 1962 classic “Misirlou” was used as the opening tune in the movie “Pulp Fiction” several years ago.  And a new, more modern version of the song that he recorded just last year (and which you can hear on YouTube) and sent to Dale himself, elicited an email from the master praising his skills.  What more do you need to know?  Summer’s ending but the surf’s up tonight!