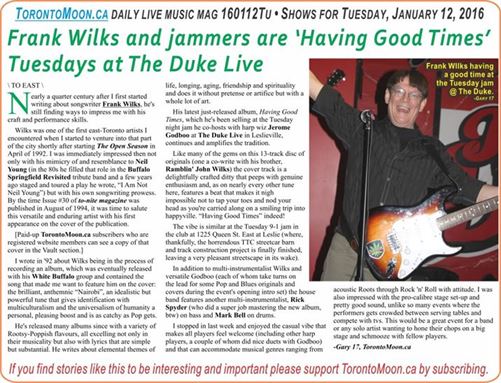 Nearly a quarter century after I first started writing about songwriter Frank Wilks, he’s still finding ways to impress me with his craft and performance skills.

Wilks was one of the first east-Toronto artists I encountered when I started to venture into that part of the city shortly after starting The Open Season in April of 1992. I was immediately impressed then not only with his mimicry of and resemblance to Neil Young (in the 80s he filled that role in the Buffalo Springfield Revisited tribute band and a few years ago staged and toured a play he wrote, “I Am Not Neil Young”) but with his own songwriting prowess. By the time Issue #30 of to-nite magazine was published in August of 1994, it was time to salute this versatile and enduring artist with his first appearance on the cover of the publication.

[Paid-up TorontoMoon.ca subscribers who are registered website members can see a copy of that cover in the Vault section.]

I wrote in ’92 about Wilks being in the process of recording an album, which was eventually released with his White Buffalo group and contained the song that made me want to feature him on the cover: the brilliant, anthemnic “Nairobi”, an idealistic but powerful tune that gives identification with multiculturalism and the universalism of humanity a personal, pleasing boost and is as catchy as Pop gets.

He’s released many albums since with a variety of Rootsy-Poppish flavours, all excelling not only in their musicality but also with lyrics that are simple but substantial. He writes about elemental themes of life, longing, aging, friendship and spirituality and does it without pretense or artifice but with a whole lot of art.

His latest just-released album, Having Good Times, which he’s been selling at the Tuesday night jam he co-hosts with harp wiz Jerome Godboo at The Duke in Leslieville, continues and amplifies the tradition.

Like many of the gems on this 13-track disc of originals (one a co-write with his brother, Ramblin’ John Wilks) the cover track is a delightfully crafted ditty that peeps with genuine enthusiasm and, as on nearly every other tune here, features a beat that makes it nigh impossible not to tap your toes and nod your head as you’re carried along on a smiling trip into happyville. “Having Good Times” indeed!

The vibe is similar at the Tuesday 9-1 jam in the club at 1225 Queen St. East at Leslie (where, thankfully, the horrendous TTC streetcar barn and track construction project is finally finished, leaving a very pleasant streetscape in its wake).

In addition to multi-instrumentalist Wilks and versatile Godboo (each of whom take turns on the lead for some Pop and Blues originals and covers during the event’s opening intro set) the house band features another multi-instrumentalist, Rick Spyder (who did a super job mastering the new album, btw) on bass and Mark Bell on drums.

I stopped in last week and enjoyed the casual vibe that makes all players feel welcome (including other harp players, a couple of whom did nice duets with Godboo) and that can accommodate musical genres ranging from acoustic Roots through Rock ‘n’ Roll with attitude. I was also impressed with the pro-calibre stage set-up and pretty good sound, unlike so many events where the performers gets crowded between serving tables and compete with tvs. This would be a great event for a band or any solo artist wanting to hone their chops on a big stage and schmooze with fellow players.