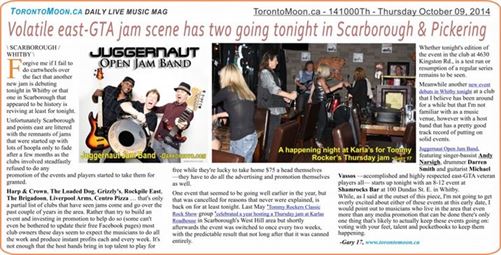 Forgive me if I fail to do cartwheels over the fact that another new jam is debuting tonight in Whitby or that one in Scarborough that appeared to be history is reviving at least for tonight.

Unfortunately Scarborough and points east are littered with the remnants of jams that were started up with lots of hoopla only to fade after a few months as the clubs involved steadfastly refused to do any promotion of the events and players started to take them for granted.

Harp & Crown, The Loaded Dog, Grizzly’s, Rockpile East, The Brigadoon, Liverpool Arms, Centro Pizza … that’s only a partial list of clubs that have seen jams come and go over the past couple of years in the area. Rather than try to build an event and investing in promotion to help do so (some can’t even be bothered to update their free Facebook pages) most club owners these days seem to expect the musicians to do all the work and produce instant profits each and every week. It’s not enough that the host bands bring in top talent to play for free while they’re lucky to take home $75 a head themselves —they have to do all the advertising and promotion themselves as well.

One event that seemed to be going well earlier in the year, but that was cancelled for reasons that never were explained, is back on for at least tonight. Last May Tommy Rocker’s Classic Rock Show group celebrated a year hosting a Thursday jam at Karla’s Roadhouse in Scarborough’s West Hill area but shortly afterwards the event was switched to once every two weeks, with the predictable result that not long after that it was canned entirely.

Whether tonight’s edition of the event in the club at 4630 Kingston Rd., is a test run or resumption of a regular series remains to be seen.

Meanwhile another new event debuts in Whitby tonight at a club that I believe has been around for a while but that I’m not familiar with as a music venue, however with a host band that has a pretty good track record of putting on solid events.

While, as I said at the outset of this piece, I’m not going to get overly excited about either of these events at this early date, I would point out to musicians who live in the area that even more than any media promotion that can be done there’s only one thing that’s likely to actually keep these events going on: voting with your feet, talent and pocketbooks to keep them happening. 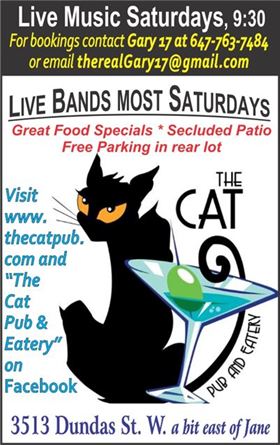