As I’ve written many times since March of 2013, I believe effervescent and emotive singer Laura Hubert and her longtime piano accompanist virtuoso Peter Hill have long deserved more exposure and better time slots at TO’s most enduring Jazz room, The Rex, which was then finally starting to happen along with an appearance as part of the Toronto Jazz Festival that year.

She’s performed as part of the festival every year since and last year actually had two shows: her regular Rex appearance plus a set at 120 Diner, a room which had just started out and has since established a pretty favourable profile on the local Jazz scene.

This year she’s back for another 3:30 Rex show this Saturday as part of that cavalcade, while Peter and his quintet are actually bracketing the event, having done every Tuesday in June except this past one and returning for another series on Mondays starting July 4 —the day after the festival ends.

But as much as it’s great to hear these two artists in toney rooms (they’ve also played Reservoir Lounge the old Monarchs Pub and other classy spots) either together or in other configurations (Peter also does a new weekly Tuesday piano/horn duo show at La Rev in the Junction area and “Girls Night Out” with Lisa Particelli at 120 Wednesdays) they’ve always thrived in more casual rooms like Mezzrows and The Intersteer.   But there is one decidedly declassé place that I still regard as their “home” venue —and not just because at one time they performed there every week for just shy of ten years— and where I really enjoy seeing them the most: Grossman’s Tavern at 379 Spadina Ave.

To me, G-man brings out the real visceral power of Hubert’s vocals on Pop-Jazz songs that stem from the ambivalence of the Dirty Thirties Depression and 40s war years era, giving fresh vigour and a mesmerizing stage presence to tunes that have surprisingly contemporary resonance.  And naturally Hill responds in kind with by turns exhilarating or heartfelt accompaniment that’s often also quite inventive.

Throw in some veteran drums and soulful sax (they’ve employed a number of talents in each position over the 17 or so years they’ve been a duo since Hubert moved to Jazz from her Juno-winning Leslie Spit TreeO Folk-Rock group) and you have a sometimes guttural, other times almost ethereal experience that the club’s grizzled history is well used to spawning.

While Grossman’s is not the place it used to be back when an adventurous fly would have found the washrooms particularly rich territory to mine for excreta of various kinds, it still has its ghosts and legacies, not least in the photos that yet adorn the south wall of the room in which an eclectic mix of bands with various affinities to the Blues is offered seven nights a week and twice on weekends.  It’s got what ya might call ATMOSPHERE, even if no longer of the inhaled kind.

So it’s a great place to catch this band in what feels like their most natural and authentic incarnation, and happily you can do that tonight.  Best of all about the group’s shows there (aside from the other fact that there’s no cover) is that they’re not a one-long or two-short-set deal —these full-show gigs go from 10ish till close, so it gives the band time to really connect, develop a mood and create an adventure out of the night.  This is the stuff from which real Jazz was born. 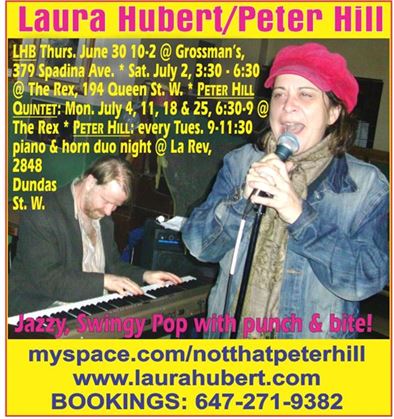