/// Robbie “The Blues Butcher” Bellmore, who passed away at just 57 years of age sometime earlier this week while vacationing in Cuba, was a sparkplug harmonica player and singer who added a lot of energy and audience appeal to a band. But he’ll be missed by his musical friends as much for his upbeat personality, particularly his sense of humour, as for his undeniable performance talents.

“I think he’ll be most remembered for his love of life and his humour,” longtime friend and former co-worker (at an actual butcher shop) Pat Axe told me in a message from Vancouver, whither he moved in 1993. Despite the vast geographical distance, the two kept in touch after forming a close bond during their days hacking meat by day and Blues songs at night together in the 1980s.

“He was one of the funniest people I’ve ever known. He was always a laugh,” Axe recalled.

“When I worked and hung out with him we did a set of Blues together at the Hotel Isabella fundraiser for the first TBS (Toronto Blues Society) gathering, which also happened to be on the same day as Live Aid. We were the first act on that day and he was great. I still remember it like it was yesterday. People would come from all around to get a joke, tell a joke or just hang out. He was the funniest guy I’ve ever known.”

Another musician who formed a close bond with Robbie, guitarist and songwriter Johnny Cox, talked with him recently about his new album, Thin Blue Line, released in March, on which Bellmore was a featured player.

“He was so happy it was getting airplay. He is on the title track and #7, ‘My Destination’.”

Cox said he knew Robbie was having liver troubles and “he was trying hard to lay off the booze.

“He seemed to be suffering from a bad bug for a while. It’s a total shock though. He was way too young. A great guy!”

Axe also recalled Robbie as someone who was very caring about those he was close to.

“He wouldn’t sit still and let someone who was in his close circle suffer. I remember one time when I was feeling really down and he came by my place and dragged me out and we had fun.” Axe said.

Axe and Cox also recalled, as does this writer, how Bellmore devoted himself to his mother for over two years while she suffered from illness prior to passing away about a year-and-a-half ago.

Singer Nicole Dunn, who toured Europe and Holland with Bellmore in the ‘80s, and who remained a close friend and musical collaborator, was devastated by the news of his passing.

“You were my brother from another mother since 1972,” she posted on her Facebook page.

“We played music together for a quarter of a century. …I love you and miss you already,” she said.

Personally I always enjoyed his devil-may-care attitude and the fact that he was an ardent and long-time supporter of the Moon magazine and one of the first subscribers to sign on when I moved to that risky funding model in the fall of 2008. I had first met him back in the mid-90s when he was a regular at the weekly jams at the then-Rio club on Danforth across from the Black Swan. Back then he also crafted for me (at no charge!) not one but two beautiful leather bracelets that were treasured accessories until they eventually wore out. He was a very talented leather artisan in addition to his musical talents and ebullient personality. 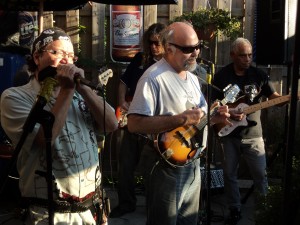 When we chatted at Black Swan earlier this month, shortly before he was due to return to Cuba, Robbie told me “I’ll always support what you do because it’s invaluable to the music community.” He was a big enthusiast of the local music scene and booster of the players with whom he teamed up, willing to do whatever was required to make a gig a success. And he also attended plenty of other people’s shows to support them and naturally was often asked to sit in for a few tunes.

No information has yet been released about funeral arrangements. If anyone with knowledge of what those will be could share them with us, I’d be grateful.

Moon subscribers can enjoy a very brief but representative video clip of Robbie performing with Johnny Cox and David Rosenfeld and two other players for a 2011 patio show at Wise Guys in East TO, where he was also a staple of the entertainment roster for many years. See the separate subscribers-only posting in the MoonTV section of the site for the clip and click the link you’ll find in that post. 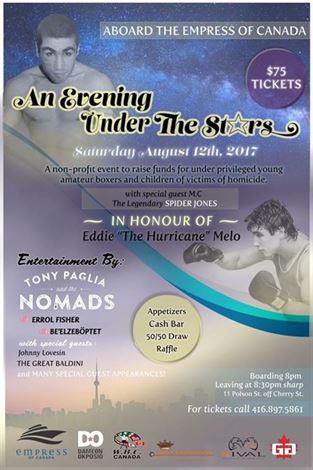