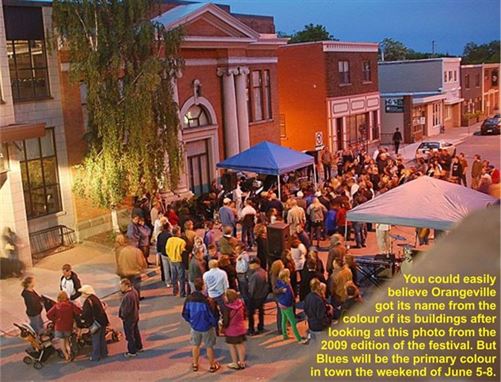 You could easily believe Orangeville got its name from the colour of its buildings after looking at this photo from the 2009 edition of the festival. But Blues will be the primary colour in town the weekend of June 5-8.

It’s June and the weather is lovely, so music festival season is just around the corner –or actually it’s not, it’s here now!

This weekend, starting on Thursday June 5 and running until Sunday, June 8, the first music festival of the season, the Orangeville Blues and Jazz Festival, takes place up in the quirky little town of Orangeville, Ontario, located straight up Highway 10 at the intersection of Highway 9 in the Caledon foothills below the rise of the escarpment.

I call it quirky because in Orangeville all the houses are painted orange and the trees all have orange leaves year-round. Okay, I’m kidding about that but I couldn’t resist because 25 years ago when I had just moved to the little village of Alton a bit south of the burg and my youngest daughter came to visit I described the town that way to her as we prepared for her first excursion there to see a movie; her five-year-old eyes went so wide that it nearly broke my heart to have to tell her half way there that daddy was only fooling. (Although there were, as promised, lots of orange trees, since in autumn the stately maples that line sections of the main drag, Broadway Ave. —yep, they have a Broadway!— were indeed resplendently beautiful.) I’m not sure if she was disappointed or relieved, but she ended up loving the town and after I moved there for a year we had some wonderful times seeing movies and going bowling –about all there was in the area to do for a dad and daughter on a limited budget in those days!

Although many might assume Orangeville actually gets its name from the infamous Orange Lodge of anti-Catholics (the area is a Conservative bastion of mostly very white, not orange, people) in fact it’s derived from the name of a U.S. expatriate who owned several mills in the area, Orange Lawrence, who bought a huge swathe of land in the area from another local in the 1820s.

I call Orangeville quirky for other reasons –it’s a peculiar little community that’s a world unto itself. Surrounded by beautiful scenery and a weekend magnet for many of the successful artists, horsey-set gentry and others who can afford country estates nearby, it also has (or had then, at any rate) a kind of rough underbelly that was typified by an average Friday night’s clubbing entertainment: watching bouncers from one bar visit another so that they could engage in fisticuffs with the staff at the “home ring” outside in front of an encouraging crowd once the place had closed. The local cops were like referees in an NHL brawl, just trying to keep things contained rather than stopping anything and after the fights were over would take the victor and/or the vanquished away –whether to a cell or to an private after-hours I never did learn.

No doubt the place has changed a lot since I dwelt there and certainly the growth of the festival, which, as I wrote in an article in June of 2010, was started in 2002 with just a couple of venues, is a testament to how that community has come together to support its arts and turn them into a civic asset. The event actually won the Best Festival or Event award from Hills Of The Headwater Tourism in 2010 and has attracted up to 30,000 people from all across Ontario.

This year’s edition features 30 venues both in the town itself and in surrounding burgs such as Alton, Caledon and Hockley Valley. It kicks off with eight shows on Thursday, has 30 on Friday, 46 on the Saturday and 23 on the Sunday, most of them either free or pay-what-you-can affairs.

If you go, you’ll see more than a few acts who regularly perform in Toronto on the roster. Danny Marks, Rita Di Ghent, Sean Pinchin, Mark “Bird” Stafford, Jake Chisholm, Fraser and Girard, Jason Wilson, Richard Underhill, Pat Carey and Brian Blain are all featured. There are also many local Orangeville-area acts on display, a very positive sign that the area is nourishing its local talent, plus several performers from across the province, country and beyond, such as Sabrina Weeks (Vancouveer), Mo Kauffey (Guelph), Michael Keys (Burlington), Wayne Buttery (Orr Lake), Jerron “Blind Boy” Paxton from NYC and several Montreal acts.

For more information and the full schedule check out the festival website at http://www.orangevillebluesandjazz.ca/