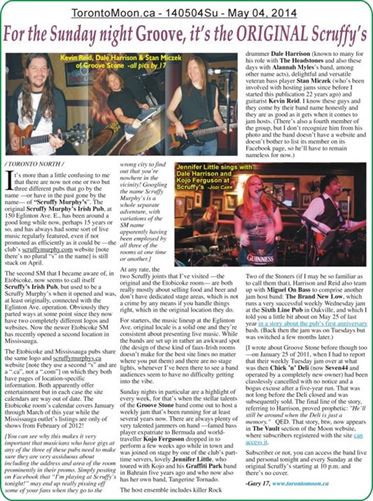 For the Sunday night Groove, it’s the ORIGINAL Scruffy’s

It’s more than a little confusing to me that there are now not one or two but three different pubs that go by the name —or have in the past gone by the name— of “Scruffy Murphy’s”. The original Scruffy Murphy’s Irish Pub, at 150 Eglinton Ave. E., has been around a good long while now, perhaps 15 years or so, and has always had some sort of live music regularly featured, even if not promoted as efficiently as it could be —the club’s scruffymurphy.com website [note there’s no plural “s” in the name] is still stuck on April.

The second SM that I became aware of, in Etobicoke, now seems to call itself Scruffy’s Irish Pub, but used to be a Scruffy Murphy’s when it opened and was, at least originally, connected with the Eglinton Ave. operation. Obviously they parted ways at some point since they now have two completely different logos and websites. Now the newer Etobicoke SM has recently opened a second location in Mississauga.

The Etobicoke and Mississauga pubs share the same logo and scruffymurphys.ca website [note they use a second “s” and are a “.ca”, not a “.com”] on which they both have pages of location-specific information. Both apparently offer entertainment but in each case the site calendars are way out of date. The Etobicoke room’s calendar covers January through March of this year while the Mississauga outlet’s listings are only of shows from February of 2012!

[You can see why this makes it very important that musicians who have gigs at any of the three of these pubs need to make sure they are very assiduous about including the address and area of the room prominently in their promo. Simply posting on Facebook that “I’m playing at Scruffy’s tonight!” may end up really pissing off some of your fans when they go to the wrong city to find out that you’re nowhere in the vicinity! Googling the name Scruffy Murphy’s is a whole separate adventure, with variations of the SM name apparently having been employed by all three of the rooms at one time or another.]

At any rate, the two Scruffy joints that I’ve visited –the original and the Etobicoke room— are both really mostly about selling food and beer and don’t have dedicated stage areas, which is not a crime by any means if you handle things right, which in the original location they do.

For starters, the music lineup at the Eglinton Ave. original locale is a solid one and they’re consistent about presenting live music. While the bands are set up in rather an awkward spot (the design of these kind of faux-Irish rooms doesn’t make for the best site lines no matter where you put them) and there are no stage lights, whenever I’ve been there to see a band audiences seem to have no difficulty getting into the vibe. 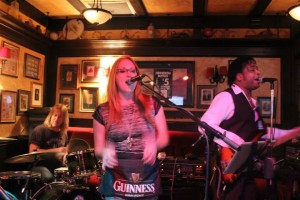 Sunday nights in particular are a highlight of every week, for that’s when the stellar talents of the Groove Stone band come out to host a weekly jam that’s been running for at least several years now. There are always plenty of very talented jammers on hand –famed bass player expatriate to Bermuda and world-traveller Kojo Ferguson dropped in to perform a few weeks ago while in town and was joined on stage by one of the club’s part-time servers, lovely Jennifer Little, who toured with Kojo and his Graffiti Park band in Bahrain five years ago and who now also has her own band, Tangerine Tornado.

The host ensemble includes killer Rock drummer Dale Harrison (known to many for his role with The Headstones and also these days with Alannah Myles’s band, among other name acts), delightful and versatile veteran bass player Stan Miczek (who’s been involved with hosting jams since before I started this publication 22 years ago) and guitarist Kevin Reid. I know these guys and they come by their band name honestly and they are as good as it gets when it comes to jam hosts. (There’s also a fourth member of the group, but I don’t recognize him from his photo and the band doesn’t have a website and doesn’t bother to list its member on its Facebook page, so he’ll have to remain nameless for now.)

Two of the Stoners (if I may be so familiar as to call them that), Harrison and Reid also team up with Miguel On Bass to comprise another jam host band: The Brand New Low, which runs a very successful weekly Wednesday jam at the Sixth Line Pub in Oakville, and which I told you a little bit about on May 25 of last year in a story about the pub’s first anniversary bash. (Back then the jam was on Tuesdays but was switched a few months later.)

[I wrote about Groove Stone before though too –on January 25 of 2011, when I had to report that their weekly Tuesday jam over at what was then Chick ‘n’ Deli (now Seven44 and operated by a completely new owner) had been classlessly cancelled with no notice and a bogus excuse after a five-year run. That was not long before the Deli closed and was subsequently sold. The final line of the story, referring to Harrison, proved prophetic: “He’ll still be around when The Deli is just a memory.”  QED.  That story, btw now appears in The Vault section of the Moon website, where subscribers registered with the site can access it.]

Subscriber or not, you can access the band live and personal tonight and every Sunday at Scruffy’s starting at 10 p.m. and there’s no cover.