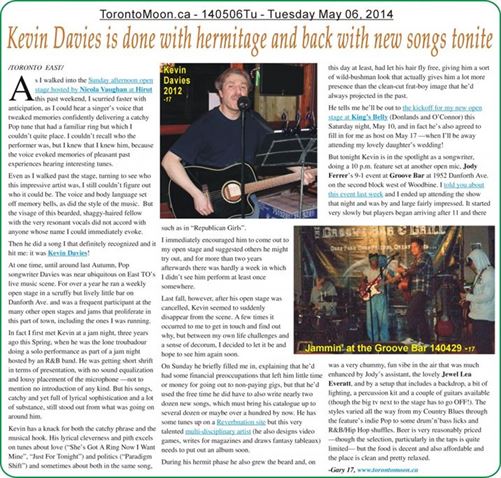 As I walked into the Sunday afternoon open stage hosted by Nicola Vaughan at Hirut this past weekend, I scurried faster with anticipation, as I could hear a singer’s voice that tweaked memories confidently delivering a catchy Pop tune that had a familiar ring but which I couldn’t quite place. I couldn’t recall who the performer was, but I knew that I knew him, because the voice evoked memories of pleasant past experiences hearing interesting tunes.

Even as I walked past the stage, turning to see who this impressive artist was, I still couldn’t figure out who it could be. The voice and body language set off memory bells, as did the style of the music.  But the visage of this bearded, shaggy-haired fellow with the very resonant vocals did not accord with anyone whose name I could immediately evoke.

Then he did a song I that definitely recognized and it hit me: it was Kevin Davies!

At one time, until around last Autumn, Pop songwriter Davies was near ubiquitous on East TO’s live music scene. For over a year he ran a weekly open stage in a scruffy but lively little bar on Danforth Ave. and was a frequent participant at the many other open stages and jams that proliferate in this part of town, including the ones I was running.

In fact I first met Kevin at a jam night, three years ago this Spring, when he was the lone troubadour doing a solo performance as part of a jam night hosted by an R&B band. He was getting short shrift in terms of presentation, with no sound equalization and lousy placement of the microphone –not to mention no introduction of any kind. But his songs, catchy and yet full of lyrical sophistication and a lot of substance, still stood out from what was going on around him.

Kevin has a knack for both the catchy phrase and the musical hook. His lyrical cleverness and pith excels on tunes about love (“She’s Got A Ring Now I Want Mine”, “Just For Tonight”) and politics (“Paradigm Shift”) –and sometimes about both in the same song, such as in “Republican Girls”.

I immediately encouraged him to come out to my open stage and suggested others he might try out, and for more than two years afterwards there was hardly a week in which I didn’t see him perform at least once somewhere.

Last fall, however, after his open stage was cancelled, Kevin seemed to suddenly disappear from the scene. A few times it occurred to me to get in touch and find out why, but between my own life challenges and a sense of decorum, I decided to let it be and hope to see him again soon.

On Sunday he briefly filled me in, explaining that he’d had some financial preoccupations that left him little time or money for going out to non-paying gigs, but that he’d used the free time he did have to also write nearly two dozen new songs, which must bring his catalogue up to several dozen or maybe over a hundred by now. He has some tunes up on a Reverbnation site but this very talented multi-disciplinary artist (he also designs video games, writes for magazines and draws fantasy tableaux) needs to put out an album soon.

During his hermit phase he also grew the beard and, on this day at least, had let his hair fly free, giving him a sort of wild-bushman look that actually gives him a lot more presence than the clean-cut frat-boy image that he’d always projected in the past.

He tells me he’ll be out to the kickoff for my new open stage at King’s Belly (Donlands and O’Connor) this Saturday night, May 10, and in fact he’s also agreed to fill in for me as host on May 17 –when I’ll be away attending my lovely daughter’s wedding!

But tonight Kevin is in the spotlight as a songwriter, doing a 10 p.m. feature set at another open mic, Jody Ferrer’s 9-1 event at Groove Bar at 1952 Danforth Ave. on the second block west of Woodbine. I told you about this event last week and I ended up attending the show that night and was by and large fairly impressed. It started very slowly but players began arriving after 11 and there was a very chummy, fun vibe in the air that was much enhanced by Jody’s assistant, the lovely Jewel Lea Everatt, and by a setup that includes a backdrop, a bit of lighting, a percussion kit and a couple of guitars available (though the big tv next to the stage has to go OFF!). The styles varied all the way from my Country Blues through the feature’s indie Pop to some drum’n’bass licks and R&B/Hip Hop shuffles. Beer is very reasonably priced —though the selection, particularly in the taps is quite limited— but the food is decent and also affordable and the place is clean and pretty relaxed.