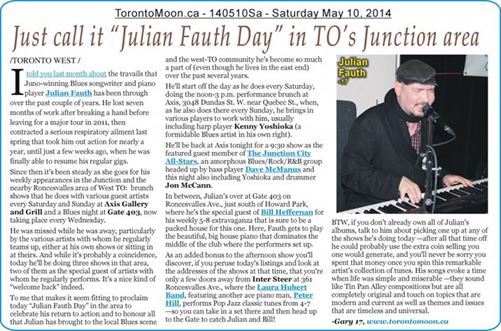 I told you last month about the travails that Juno-winning Blues songwriter and piano player Julian Fauth has been through over the past couple of years. He lost seven months of work after breaking a hand before leaving for a major tour in 2011, then contracted a serious respiratory ailment last spring that took him out action for nearly a year, until just a few weeks ago, when he was finally able to resume his regular gigs.

Since then it’s been steady as she goes for his weekly appearances in the Junction and the nearby Roncesvalles area of West TO:  brunch shows that he does with various guest artists every Saturday and Sunday at Axis Gallery and Grill and a Blues night at Gate 403, now taking place every Wednesday.

To me that makes it seem fitting to proclaim today “Julian Fauth Day” in the area to celebrate his return to action and to honour all that Julian has brought to the local Blues scene and the west-TO community he’s become so much a part of (even though he lives in the east end) over the past several years.

He’ll start off the day as he does every Saturday, doing the noon-3 p.m. performance brunch at Axis, 3048 Dundas St. W. near Quebec St., when, as he also does there every Sunday, he brings in various players to work with him, usually including harp player Kenny Yoshioka (a formidable Blues artist in his own right).

He’ll be back at Axis tonight for a 9:30 show as the featured guest member of The Junction City All-Stars, an amorphous Blues/Rock/R&B group headed up by bass player Dave McManus and this night also including Yoshioka and drummer Jon McCann.

In between, Julian’s over at Gate 403 on Roncesvalles Ave., just south of Howard Park, where he’s the special guest of Bill Heffernan for his weekly 5-8 extravaganza that is sure to be a packed house for this one. Here, Fauth gets to play the beautiful, big house piano that dominates the middle of the club where the performers set up.

As an added bonus to the afternoon show you’ll discover, if you peruse today’s listings and look at the addresses of the shows at that time, that you’re only a few doors away from Inter Steer at 361 Roncesvalles Ave., where the Laura Hubert Band, featuring another ace piano man, Peter Hill, performs Pop Jazz classic tunes from 4-7 –so you can take in a set there and then head up to the Gate to catch Julian and Bill!

BTW, if you don’t already own all of Julian’s albums, talk to him about picking one up at any of the shows he’s doing today –after all that time off he could probably use the extra coin selling you one would generate, and you’ll never be sorry you spent that money once you spin this remarkable artist’s collection of tunes. His songs evoke a time when life was simple and miserable –they sound like Tin Pan Alley compositions but are all completely original and touch on topics that are modern and current as well as themes and issues that are timeless and universal.