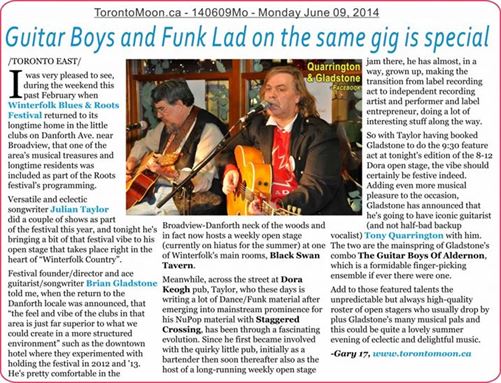 Guitar Boys and Funk Lad on the same gig is special

I was very pleased to see, during the weekend this past February when Winterfolk Blues & Roots Festival returned to its longtime home in the little clubs on Danforth Ave. near Broadview, that one of the area’s musical treasures and longtime residents was included as part of the Roots festival’s programming.

Versatile and eclectic songwriter Julian Taylor did a couple of shows as part of the festival this year, and tonight he’s bringing a bit of that festival vibe to his open stage that takes place right in the heart of “Winterfolk Country”.

Festival founder/director and ace guitarist/songwriter Brian Gladstone told me, when the return to the Danforth locale was announced, that “the feel and vibe of the clubs in that area is just far superior to what we could create in a more structured environment” such as the downtown hotel where they experimented with holding the festival in 2012 and ’13.  He’s pretty comfortable in the Broadview-Danforth neck of the woods and in fact now hosts a weekly open stage (currently on hiatus for the summer) at one of Winterfolk’s main rooms, Black Swan Tavern.

Meanwhile, across the street at Dora Keogh pub, Taylor, who these days is writing a lot of Dance/Funk material after emerging into mainstream prominence for his NuPop material with Staggered Crossing, has been through a fascinating evolution. Since he first became involved with the quirky little pub, initially as a bartender then soon thereafter also as the host of a long-running weekly open stage jam there, he has almost, in a way, grown up, making the transition from label recording act to independent recording artist and performer and label entrepreneur, doing a lot of interesting stuff along the way.

So with Taylor having booked Gladstone to do the 9:30 feature act at tonight’s edition of the 8-12 Dora open stage, the vibe should certainly be festive indeed. Adding even more musical pleasure to the occasion, Gladstone has announced that he’s going to have iconic guitarist (and not half-bad backup vocalist) Tony Quarrington with him. The two are the mainspring of Gladstone’s combo The Guitar Boys Of Aldernon, which is a formidable finger-picking ensemble if ever there were one.

Add to those featured talents the unpredictable but always high-quality roster of open stagers who usually drop by plus Gladstone’s many musical pals and this could be quite a lovely summer evening of eclectic and delightful music.