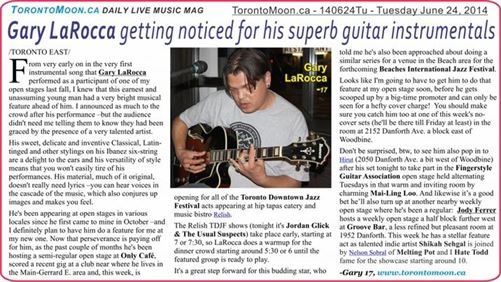 Gary LaRocca getting noticed for his superb guitar instrumentals

From very early on in the very first instrumental song that Gary LaRocca performed as a participant of one of my open stages last fall, I knew that this earnest and unassuming young man had a very bright musical feature ahead of him. I announced as much to the crowd after his performance –but the audience didn’t need me telling them to know they had been graced by the presence of a very talented artist.

His sweet, delicate and inventive Classical, Latin-tinged and other stylings on his Ibanez six-string are a delight to the ears and his versatility of style means that you won’t easily tire of his performances. His material, much of it original, doesn’t really need lyrics –you can hear voices in the cascade of the music, which also conjures up images and makes you feel.

He’s been appearing at open stages in various locales since he first came to mine in October –and I definitely plan to have him do a feature for me at my new one. Now that perseverance is paying off for him, as the past couple of months he’s been hosting a semi-regular open stage at Only Café, scored a recent gig at a club near where he lives in the Main-Gerrard E. area and, this week, is opening for all of the Toronto Downtown Jazz Festival acts appearing at hip tapas eatery and music bistro Relish.

The Relish TDJF shows (tonight it’s Jordan Glick & The Usual Suspects) take place early, starting at 7 or 7:30, so LaRocca does a warmup for the dinner crowd starting around 5:30 or 6 until the featured group is ready to play.

It’s a great step forward for this budding star, who told me he’s also been approached about doing a similar series for a venue in the Beach area for the forthcoming Beaches International Jazz Festival.

Looks like I’m going to have to get him to do that feature at my open stage soon, before he gets scooped up by a big-time promoter and can only be seen for a hefty cover charge!  You should make sure you catch him too at one of this week’s no-cover sets (he’ll be there till Friday at least) in the room at 2152 Danforth Ave. a block east of Woodbine.

Don’t be surprised, btw, to see him also pop in to Hirut (2050 Danforth Ave. a bit west of Woodbine) after his set tonight to take part in the Fingerstyle Guitar Association open stage held alternating Tuesdays in that warm and inviting room by charming Mai-Ling Loo. And likewise it’s a good bet he’ll also turn up at another nearby weekly open stage where he’s been a regular: Jody Ferrer hosts a weekly open stage a half block further west at Groove Bar, a less refined but pleasant room at 1952 Danforth. This week he has a stellar feature act as talented indie artist Shikah Sehgal is joined by Nelson Sobral of Melting Pot and I Hate Todd fame for the showcase starting around 10.

TDJF = Toronto Downtown Jazz Festival; cover charge/pass entry for most shows except where specified otherwise by $0 in listing.