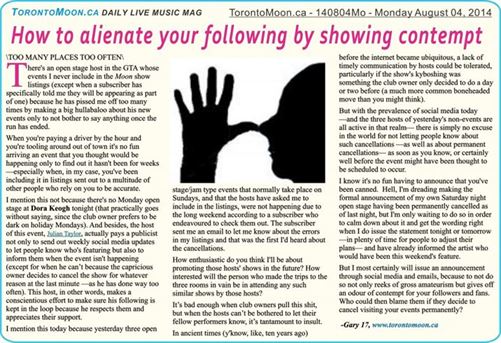 How to alienate your following by showing contempt

\TOO MANY PLACES TOO OFTEN\

There’s an open stage host in Toronto whose events I never include in the Moon show listings (except when a subscriber has specifically told me they will be appearing as part of one) because he has pissed me off too many times by making a big hullabaloo about his new events only to not bother to say anything once the run has ended.

When you’re paying a driver by the hour and you’re tooling around out of town it’s no fun arriving at an event that you thought would be happening only to find out it hasn’t been for weeks —especially when, in my case, you’ve been including it in listings sent out to a multitude of other people who rely on you to be accurate.

I mention this not because there’s no Monday open stage at Dora Keogh tonight (that practically goes without saying, since the club owner prefers to be dark on holiday Mondays). And besides, the host of this event, Julian Taylor, actually pays a publicist not only to send out weekly social media updates to let people know who’s featuring but also to inform them when the event isn’t happening (except for when he can’t because the capricious owner decides to cancel the show for whatever reason at the last minute —as he has done way too often). This host, in other words, makes a conscientious effort to make sure his following is kept in the loop because he respects them and appreciates their support.

I mention this today because yesterday three open stage/jam type events that normally take place on Sundays, and that the hosts have asked me to include in the listings, were not happening due to the long weekend according to a subscriber who endeavoured to check them out. The subscriber sent me an email to let me know about the errors in my listings and that was the first I’d heard about the cancellations.

How enthusiastic do you think I’ll be about promoting those hosts’ shows in the future? How interested will the person who made the trips to the three rooms in vain be in attending any such similar shows by those hosts?

It’s bad enough when club owners pull this shit, but when the hosts can’t be bothered to let their fellow performers know, it’s tantamount to insult.

In ancient times (y’know, like, ten years ago) before the internet became ubiquitous, a lack of timely communication by hosts could be tolerated, particularly if the show’s kyboshing was something the club owner only decided to do a day or two before (a much more common boneheaded move than you might think).

But with the prevalence of social media today —and the three hosts of yesterday’s non-events are all active in that realm— there is simply no excuse in the world for not letting people know about such cancellations —as well as about permanent cancellations— as soon as you know, or certainly well before the event might have been thought to be scheduled to occur.

I know it’s no fun having to announce that you’ve been canned.  Hell, I’m dreading making the formal announcement of my own Saturday night open stage having been permanently cancelled as of last night, but I’m only waiting to do so in order to calm down about it and get the wording right when I do issue the statement tonight or tomorrow —in plenty of time for people to adjust their plans— and have already informed the artist who would have been this weekend’s feature.

But I most certainly will issue an announcement through social media and emails, because to not do so not only reeks of gross amateurism but gives off an odour of contempt for your followers and fans. Who could then blame them if they decide to cancel visiting your events permanently?