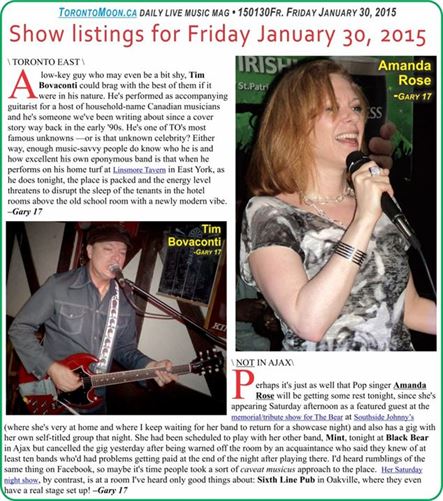 A low-key guy who may even be a bit shy, Tim Bovaconti could brag with the best of them if it were in his nature. He’s performed as accompanying guitarist for a host of household-name Canadian musicians and he’s someone we’ve been writing about since a cover story way back in the early ‘90s. He’s one of TO’s most famous unknowns —or is that unknown celebrity? Either way, enough music-savvy people do know who he is and how excellent his own eponymous band is that when he performs on his home turf at Linsmore Tavern in East York, as he does tonight, the place is packed and the energy level threatens to disrupt the sleep of the tenants in the hotel rooms above the old school room with a newly modern vibe. –Gary 17

Perhaps it’s just as well that Pop singer Amanda Rose will be getting some rest tonight, since she’s appearing Saturday afternoon as a featured guest at the memorial/tribute show for singer The Bear at Southside Johnny’s (where she’s very at home and where I keep waiting for her band to return for a showcase night) and also has a gig with her own self-titled group that night. She had been scheduled to play with her other band, Mint, tonight at Black Bear in Ajax but cancelled the gig yesterday after being warned off the room by an acquaintance who said they knew of at least ten bands who’d had problems getting paid at the end of the night after playing there. I’d heard rumblings of the same thing on Facebook, so maybe it’s time people took a sort of caveat musicus approach to the place.  Her Saturday night show, by contrast, is at a room I’ve heard only good things about: Sixth Line Pub in Oakville, where they even have a real stage set up! –Gary 17 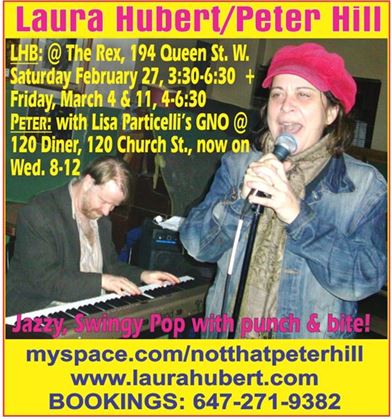