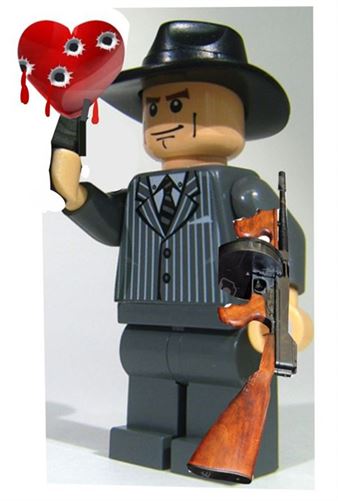 Well, it was a great idea, to take up the pen, to write romantic nothings to my lady, in anticipation of her allowing me ‘joint’ access…to her savings account. The ol’ battleaxe … she loves it. According to your editor, “Valentines Day was originally all about profligate sexual activity, back when it was a Roman holiday, before the Christians took it over.” Took it over?

I must admit that the years have not improved my character. I spent an amount of time trying to learn about our real workings, loves, flaws and hidden agendas. Another Valentine’s Day reminds me that I haven’t really gotten very far unmasking my surroundings. Example: did anyone notice how Stephen Harper promised us a lot of joints? … And Justin Trudeau is delivering a lot of joints?

Speaking of joints, Just out of the joint is a man’s most fruitfully romantic time of his life. She doesn’t look just okay in that flannel nightgown … she looks breathtaking! And it is in that spirit that I decided to bring my ol’ lady to Calgary with me. I’ve taken her for a beer, I’ve taken her hand in common-law. But if I want the keys to the ’68 Mustang that her dear old daddy left in his garage when he kicked off, I’ll have to take her to Calgary.

Last night, we packed two light suitcases for tomorrow’s flight. I made a big show out of packing a nice tie with my (only) dress shirt, to … let’s say … pique her interest. She took the bait like a junkyard bear, and I can feel the custom Mustang keys-shaped void readying a hole in my pants pocket.

Every now and again, as I tweak my cheesy little schemes, I have to pause and wonder … my God, how far along have they gotten with that mind-reading machine? I mean, if she wakes up to my manipulations, my sweet meal-ticket’s going to grow feathers and walk. Yeah … walk.

Once we’re there, I’ll put some Jazz Masters on the Galaxy music TV channel in our hotel room, and quickly cork her up with a 26’er of Finest Malt Whiskey … she gets drowsy between seven and eight ounces. That’s when I’ll decide to nip out to the store in support of the smoking habit that “worries me” once in a while. Hers.

She’ll be out cold in about fifteen minutes. She won’t know how long I’ll have been out.

Perfect, because I know of a different bunch of valentines. They’re a lot more exciting looking than my old lady, and it gives me a real rush to have a secret personality, myself, for once, instead of everybody else pulling the wool off my eyes for a cheap laugh. I know where to find them, behind a false-fronted shop, run by CSIS … CSIS? Yeah, CSIS. As long as I shower, my old lady will never know … know how much I love her, that is, heh, heh. I would never have known about it if that dirty cop hadn’t wanted to brag in front my record label friends that liked to call me up when they had shows at the theatre.

When I get back, she’ll be snuggles and giggles. I’m even ready with a bag of #RejectedCandyHearts, an idea I lifted from Twitter, and had printed up onto real candies. Why “KISS ME” and “BE MINE”? My new candy hearts (“HOW’S YOUR MOM”, “GET IN THE VAN”, “GET TESTED”) are modern hearts for modern times.