It’s hard not to become more aware —painfully so often— of the whirring by of time as we get older and as those we’ve loved or liked or partied or played with or whose talents we’ve enjoyed simply as spectators drop off the mortal plane one by one.  Much sooner than most of us would wish, it will be our turn and meanwhile we have only memories and mementos bittersweet and poignant to treasure of those who’ve gone before us.

It’s hard not to wax philosophical on this particular day, having attended last night another tribute to the late Lee Van Leer, who’s been gone two years less two months, knowing there’s another memorial concert for more recently departed Mike Murphy tonight (at Birchmount Tavern) and reflecting that it was ten years ago today that a giant of a Folksinger songwriter, Norm Hacking, passed on, and that it was nine years ago today that I reported on the sudden, tragic death of Rock songwriter, producer and all round good guy Kenny MacLean a few days after staging a triumphant cd release show at Mod Club.

I won’t go into details here about any of these sad vacancies in our lives, but suffice it to say that they’re only a few among a pantheon of talents I have spent the past 25-plus years writing about, photographing and interacting with and the rate of additions to that rank doesn’t show any signs of abating any time soon.  So until it’s my turn I suppose I’ll be writing several more yet to come.

On that note I do want to mention something about Norm’s passing ten years ago today.  Sad as the truth is, it was actually his death that ended up saving my own life.

I had been suffering throughout that month of November from what I assumed at the time was a serious case of the flu and by the time Norm died I was barely able to walk up a flight of stairs without great difficulty and sleeping 12 or more hours a day, barely functioning.  A couple of weeks after he died I learned that Norm, who was the same age as I, had been complaining of similar symptoms for a week or so without getting a diagnosis or treatment before going to bed one night and never waking up.  Eventually, as my own condition continued to deteriorate, it dawned on me that whatever was wrong with me I could be at risk of suffering a similar fate and though I had eschewed doctors and hospitals for a quarter of a century previously, finally, a few days before Christmas I made my way to the local hospital.  There I was told I had suffered a heart attack —which seemed a preposterous idea at the time since I’d never had any chest pains— and was a “time bomb” ready to expire literally at any moment.  I was rushed into the cardiology ward where I spent ten days recovering and learning about “silent heart attacks” and why I needed to adjust my lifestyle if I wanted to make it to another birthday.  Thanks to doing that and meds I’m still chugging along a few weeks short of a decade later.  But if I hadn’t had the example of Norm, who put off getting help too long, I would not be writing this today.

For Norm and the many other folks I’ve written about in similarly sad circumstances, I have wanted to help preserve memories of them through this publication’s archives, specifically the Legacies –Remembering Departed Talents section, and have hoped for the past few years to be able to establish a Musical Legacies Online Museum in which photos, articles, reminiscences, recordings, etc. of many of them would reside.  Unfortunately the local music community has so far not only not only turned up its nose at helping fund the establishment of the MLOM but in large part has not even seen fit to support this magazine in reasonable numbers via a subscription.  So perhaps it is all in the end just doomed to become merely detritus —flotsam and jetsam littering the wake of one more passage through the time stream.

Preoccupied by these gloomy thoughts and wondering just what it is I have to do to get through to those fans who claim to support live music and those musicians who glibly thank me for articles about them or their bandmates living and dead —while not bothering to support what it is I do with the modest yearly subscription fee— I am simply not inclined today to expend the usual huge amount of effort and four to five or more hours of time it takes to compile 150+ show listings for a Saturday.

Instead, for me it is a day for reflection and sober second thoughts and while I didn’t take time off on my birthday this past week, I am now claiming dibs on my “special day” to do so today.  I shall return to the usual grind tomorrow and apologies to any of my musician subscribers with an important show that I was not able to help promote.  To anyone else reading this, “C’est la mort!” 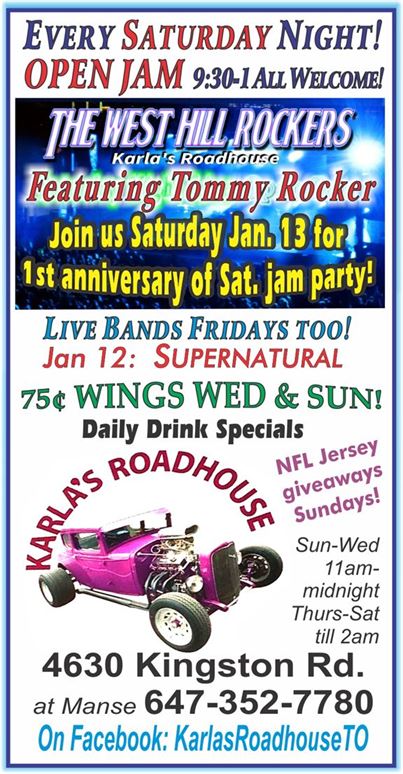