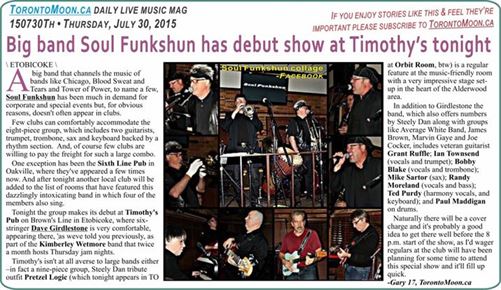 A big band that channels the music of bands like Chicago, Blood Sweat and Tears and Tower of Power, to name a few, Soul Funkshun has been much in demand for corporate and special events but, for obvious reasons, doesn’t often appear in clubs.

Few clubs can comfortably accommodate the eight-piece group, which includes two guitarists, trumpet, trombone, sax and keyboard backed by a rhythm section.  And, of course few clubs are willing to pay the freight for such a large combo. 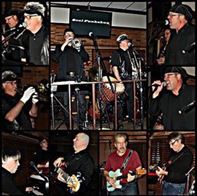 One exception has been the Sixth Line Pub in Oakville, where they’ve appeared a few times now. And after tonight another local club will be added to the list of rooms that have featured this dazzlingly intoxicating band in which four of the members also sing.

Tonight the group makes its debut at Timothy’s Pub on Brown’s Line in Etobicoke, where six-stringer Dave Girdlestone is very comfortable, appearing there, as we’ve told you previously, as part of the Kimberley Wetmore band that twice a month hosts Thursday jam nights.

Timothy’s isn’t at all averse to large bands either –in fact a nine-piece group, Steely Dan tribute outfit Pretzel Logic (which tonight appears in TO at Orbit Room, btw) is a regular feature at the music-friendly room with a very impressive stage set-up in the heart of the Alderwood area.

Naturally there will be a cover charge and it’s probably a good idea to get there well before the 8 p.m. start of the show, as I’d wager regulars at the club will have been planning for some time to attend this special show and it’ll fill up quick.

8> Our Shotgun Wedding; Piper Hayes @ No One Writes To The Colonel, 460 College St. ~indie Pop/Roots