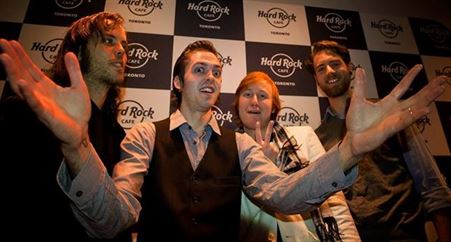 It’s been almost two years since I first wrote about energetic songwriter of Pop substance Iliya Vee and his band The Dreadful Starlings as part of a little note with the show listings for Tuesday March 25, 2022.

As I wrote at the time, my interest had been piqued by the name of the group so I checked out their website and discovered a couple of tracks that mightily impressed me, to the point where I declared that Vee (born Iliya Vukadinovic) “is a budding songwriting alt-Pop star you want to hear right now.”

A tune that particularly caught my ears and brain then was “The Regime”, one of the numbers from the group’s debut album Murmurations, released the previous year, when the outfit was still a trio.

[You can hear the tune on the Featured Tracks page of our website and download the entire album on bandcamp.com for just $10.]

Since reconstituting the group in 2014, original members Vee and drummer Steve Asselbergs (aka Steve White) continue as part of it (with Dave Sufrin often filling in for White, who lives in the Oshawa area) but the group is now a four-piece, with bassist/vocalist Matthew Stamegna (aka Dr. Keys) and electric guitarist/vocalist Nate Davis (aka N. Wilson) added. Throughout that year Vee performed a number of shows with the new lineup such as the Painted Lady stint and a residency at Not My Dog, as well as doing solo appearances, as when he did a special guest stint with Sam Taylor and The East End Love I wrote about in August that year. As the new combo performed more together things gelled and it quickly developed into “a very collaborative project” Vee tells me.

Indeed, in addition to Vee most of the other members are also songwriters, plus they’ve utilized material from fellow traveller Tim Clarke (Rory Fireplace) all combining to give the group a unique identity “without ever feeling like it becomes monotonous or predictable,” as Vee puts it.

By early last year, Vee says, “it became clear that this was a configuration worth recording, so we set to work on that,” which ended up involving a lot of experimentation in the studio and resulting in the group having since been mostly absent from the scene —until now.

Tonight that all changes as the band unveils its new five-song ep of originals with a show at the Junction Music Hall at 2907 Dundas St. West.

I’ve had a chance to check out a couple of Vee’s tunes from the new collection, titled Shack Up With The Downside, and have to say that my 2014 predictions about his future seem a pretty presciently safe bet.

His lyrics are clever, with creative rhyming and have punchy substance, while the tunes are catchy and have a familiar construction while also feeling fresh and often innovative, keeping the songs moving in a natural way that feels inevitable and fulfilling.

“Rigamarole Rock” is a cheeky, light-Pop infused number about the ambivalent relationship with work and money that many people, especially creative folks, inevitably develop. “I don’t want your money; but I need money,” the chorus wails with a bit of a 60s feel in the melody and beat, calling to mind a kind of edgier, rawer “Paperback Writer” sensibility.

“Bridges Burn” is a somewhat plaintive yet not mournful art-Pop ballad that for some reason reminds me of David Bowie, even though it doesn’t really sound at all like him —maybe it’s because the song has a kind of theatrical Pop feel, particularly in its exceptionally interesting lines and rhymes and the vocal delivery, conveying a sense of regret and emotional confusion while sounding ironic rather than soppy.

You can check out those, the other three tunes from the disc, other Starlings’ originals and the two other young acts at tonight’s release show in the club near Keele St. in the Junction area. It kicks off at 9:45 with the opening set by The Innocent Guns, followed by the Starlings at 10:45 and rounded out by Taylor’s East End Love from 11:45. Cover is just $10.