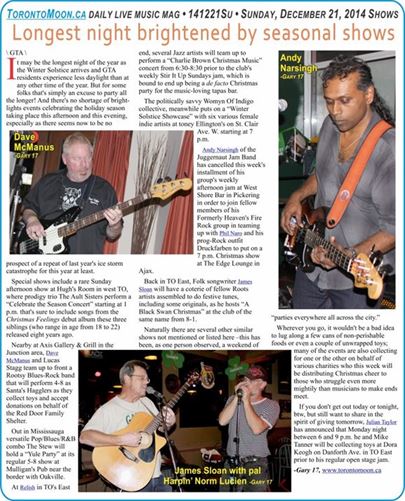 Longest night of the year brightened by seasonal shows

It may be the longest night of the year as the Winter Solstice arrives and GTA residents experience less daylight than at any other time of the year. But for some folks that’s simply an excuse to party all the longer! And there’s no shortage of bright-lights events celebrating the holiday season taking place this afternoon and this evening, especially as there seems now to be no prospect of a repeat of last year’s ice storm catastrophe for this year at least.

Special shows include a rare Sunday afternoon show at Hugh’s Room in west TO, where prodigy trio The Ault Sisters perform a “Celebrate the Season Concert” starting at 1 p.m. that’s sure to include songs from the Christmas Feelings debut album these three siblings (who range in age from 18 to 22) released eight years ago.

Nearby at Axis Gallery & Grill in the Junction area, Dave McManus and Lucas Stagg team up to front a Rootsy Blues-Rock band that will perform 4-8 as Santa’s Hagglers as they collect toys and accept donations on behalf of the Red Door Family Shelter.

Out in Mississauga versatile Pop/Blues/R&B combo The Stew will hold a “Yule Party” at its regular 5-8 show at Mulligan’s Pub near the border with Oakville.

At Relish in TO’s East end, several Jazz artists will team up to perform a “Charlie Brown Christmas Music” concert from 6:30-8:30 prior to the club’s weekly Stir It Up Sundays jam, which is bound to end up being a de facto Christmas party for the music-loving tapas bar.

Andy Narsingh of the Juggernaut Jam Band has cancelled this week’s installment of his group’s weekly afternoon jam at West Shore Bar in Pickering in order to join fellow members of his Formerly Heaven’s Fire Rock group in teaming up with Phil Naro and his prog-Rock outfit Druckfarben to put on a 7 p.m. Christmas show at The Edge Lounge in Ajax.

Back in TO East, Folk songwriter James Sloan will have a coterie of fellow Roots artists assembled to do festive tunes, including some originals, as he hosts “A Black Swan Christmas” at the club of the same name from 8-1.

Naturally there are several other similar shows not mentioned or listed here –this has been, as one person observed, a weekend of “parties everywhere all across the city.”

Wherever you go, it wouldn’t be a bad idea to lug along a few cans of non-perishable foods or even a couple of unwrapped toys; many of the events are also collecting for one or the other on behalf of various charities who this week will be distributing Christmas cheer to those who struggle even more mightily than musicians to make ends meet.

If you don’t get out today or tonight, btw, but still want to share in the spirit of giving tomorrow, Julian Taylor has announced that Monday night between 6 and 9 p.m. he and Mike Tanner will be collecting toys at Dora Keogh on Danforth Ave. in TO East prior to his regular open stage jam. 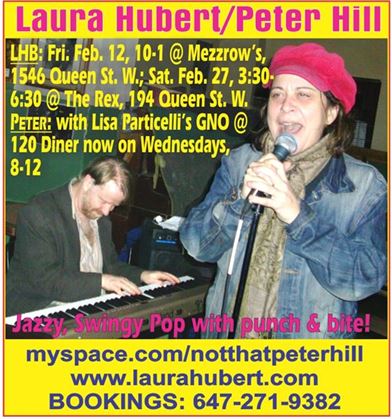