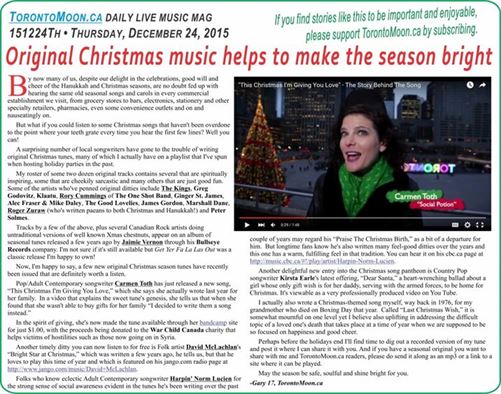 By now many of us, despite our delight in the celebrations. good will and cheer of the Hanukkah and Christmas seasons, are no doubt fed up with hearing the same old seasonal songs and carols in every commercial establishment we visit, from grocery stores to bars, electronics, stationery and other specialty retailers, pharmacies, even some convenience outlets and on and nauseatingly on.

But what if you could listen to some Christmas songs that haven’t been overdone to the point where your teeth grate every time you hear the first few lines? Well you can!

A surprising number of local songwriters have gone to the trouble of writing original Christmas tunes, many of which I actually have on a playlist that I’ve spun when hosting holiday parties in the past.

My roster of some two dozen original tracks contains several that are spiritually inspiring, some that are cheekily sarcastic and many others that are just good fun. Some of the artists who’ve penned original ditties include The Kings, Greg Godovitz, Klaatu, Rory Cummings of The One Shot Band, Ginger St. James, Alec Fraser & Mike Daley, The Good Lovelies, James Gordon, Marshall Dane, Roger Zuraw (who’s written paeans to both Christmas and Hanukkah!) and Peter Solmes.

Tracks by a few of the above, plus several Canadian Rock artists doing untraditional versions of well known Xmas chestnuts, appear on an album of seasonal tunes released a few years ago by Jaimie Vernon through his Bullseye Records company. I’m not sure if it’s still available but Get Yer Fa La Las Out was a classic release I’m happy to own!

{UPDATE: Turns out there are now three volumes of Get Yer Fa La Las Out, including the most recent Volume III, just released!}

Now, I’m happy to say, a few new original Christmas season tunes have recently been issued that are definitely worth a listen.

Pop/Adult Contemporary songwriter Carmen Toth has just released a new song, “This Christmas I’m Giving You Love,” which she says she actually wrote last year for her family. In a video that explains the sweet tune’s genesis, she tells us that when she found that she wasn’t able to buy gifts for her family “I decided to write them a song instead.”

In the spirit of giving, she’s now made the tune available through her bandcamp site for just $1.00, with the proceeds being donated to the War Child Canada charity that helps victims of hostilities such as those now going on in Syria.

Another timely ditty you can now listen to for free is Folk artist David McLachlan’s “Bright Star at Christmas,” which was written a few years ago, he tells us, but that he loves to play this time of year and which is featured on his jango.com radio page at http://www.jango.com/music/David+McLachlan.

Folks who know eclectic Adult Contemporary songwriter Harpin’ Norm Lucien for the strong sense of social awareness evident in the tunes he’s been writing over the past couple of years may regard his “Praise The Christmas Birth,” as a bit of a departure for him. But longtime fans know he’s also written many feel-good ditties over the years and this one has a warm, fulfilling feel in that tradition. You can hear it on his cbc.ca page at http://music.cbc.ca/#!/play/artist/Harpin-Norm-Lucien.

Another delightful new entry into the Christmas song pantheon is Country Pop songwriter Kirsta Earle’s latest offering, “Dear Santa,” a heart-wrenching ballad about a girl whose only gift wish is for her daddy, serving with the armed forces, to be home for Christmas. It’s viewable as a very professionally produced video on You Tube.

I actually also wrote a Christmas-themed song myself, way back in 1976, for my grandmother who died on Boxing Day that year. Called “Last Christmas Wish,” it is somewhat mournful on one level yet I believe also uplifting in addressing the difficult topic of a loved one’s death that takes place at a time of year when we are supposed to be so focused on happiness and good cheer.

Perhaps before the holidays end I’ll find time to dig out a recorded version of my tune and post it where I can share it with you. And if you have a seasonal original you want to share with me and TorontoMoon.ca readers, please do send it along as an mp3 or a link to a site where it can be played.

May the season be safe, soulful and shine bright for you.