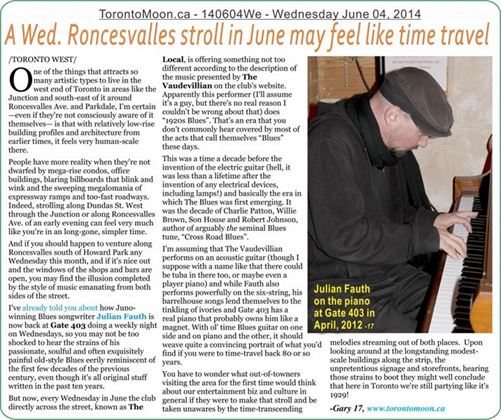 A Wed. Roncesvalles stroll in June may feel like time travel

One of the things that attracts so many artistic types to live in the west end of Toronto in areas like the Junction and south-east of it around Roncesvalles Ave. and Parkdale, I’m certain —even if they’re not consciously aware of it themselves— is that with relatively low-rise building profiles and architecture from earlier times, it feels very human-scale there.

People have more reality when they’re not dwarfed by mega-rise condos, office buildings, blaring billboards that blink and wink and the sweeping megalomania of expressway ramps and too-fast roadways. Indeed, strolling along Dundas St. West through the Junction or along Roncesvalles Ave. of an early evening can feel very much like you’re in an long-gone, simpler time.

And if you should happen to venture along Roncesvalles south of Howard Park any Wednesday this month, and if it’s nice out and the windows of the shops and bars are open, you may find the illusion completed by the style of music emanating from both sides of the street.

I’ve already told you about how Juno-winning Blues songwriter Julian Fauth is now back at Gate 403 doing a weekly night on Wednesdays, so you may not be too shocked to hear the strains of his passionate, soulful and often exquisitely painful old-style Blues eerily reminiscent of the first few decades of the previous century, even though it’s all original stuff written in the past ten years.

But now, every Wednesday in June the club directly across the street, known as The Local, is offering something not too different according to the description of the music presented by The Vaudevillian on the club’s website. Apparently this performer (I’ll assume it’s a guy, but there’s no real reason I couldn’t be wrong about that) does “1920s Blues”. That’s an era that you don’t commonly hear covered by most of the acts that call themselves “Blues” these days.

This was a time a decade before the invention of the electric guitar (hell, it was less than a lifetime after the invention of any electrical devices, including lamps!) and basically the era in which The Blues was first emerging. It was the decade of Charlie Patton, Willie Brown, Son House and Robert Johnson, author of arguably the seminal Blues tune, “Cross Road Blues”.

I’m assuming that The Vaudevillian performs on an acoustic guitar (though I suppose with a name like that there could be tuba in there too, or maybe even a player piano) and while Fauth also performs powerfully on the six-string, his barrelhouse songs lend themselves to the tinkling of ivories and Gate 403 has a real piano that probably owns him like a magnet. With ol’ time Blues guitar on one side and on piano and the other, it should weave quite a convincing portrait of what you’d find if you were to time-travel back 80 or so years.

You have to wonder what out-of-towners visiting the area for the first time would think about our entertainment biz and culture in general if they were to make that stroll and be taken unawares by the time-transcending melodies streaming out of both places.  Upon looking around at the longstanding modest-scale buildings along the strip, the unpretentious signage and storefronts, hearing those strains to boot they might well conclude that here in Toronto we’re still partying like it’s 1929!