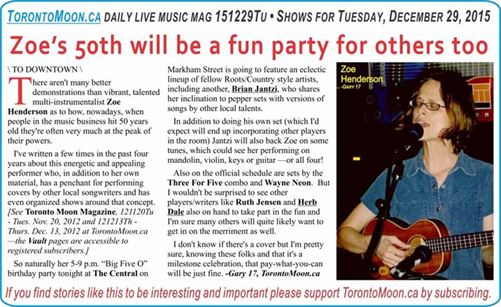 There aren’t many better demonstrations than vibrant, talented multi-instrumentalist Zoe Henderson as to how, nowadays, when people in the music business hit 50 years old they’re often very much at the peak of their powers.

I’ve written a few times in the past four years about this energetic and appealing performer who, in addition to her own material, has a penchant for performing covers by other local songwriters and has even organized shows around that concept. [See Toronto Moon Magazine, 121120Tu - Tues. Nov. 20, 2012 and 121212Th - Dec. 13, 2012 at TorontoMoon.ca —the Vault pages are accessible to registered subscribers.]

So naturally her 5-9 p.m. “Big Five O” birthday party tonight at The Central on Markham Street is going to feature an eclectic lineup of fellow Roots/Country style artists, including another, Brian Jantzi, who shares her inclination to pepper sets with versions of songs by other local talents.

In addition to doing his own set (which I’d expect will end up incorporating other players in the room) Jantzi will also back Zoe on some tunes, which could see her performing on mandolin, violin, keys or guitar —or all four!

Also on the official schedule are sets by the Three For Five combo and Wayne Neon. But I wouldn’t be surprised to see other players/writers like Ruth Jensen and Herb Dale also on hand to take part in the fun and I’m sure many others will quite likely want to get in on the merriment as well.

I don’t know if there’s a cover but I’m pretty sure, knowing these folks and that it’s a milestone celebration, that pay-what-you-can will be just fine.