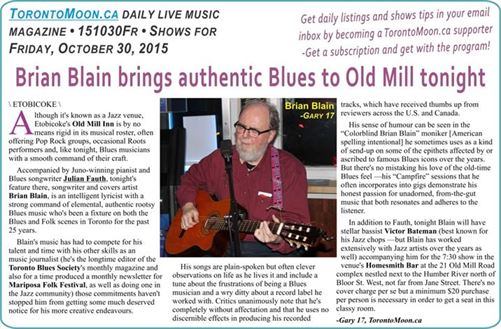 Although it’s known as a Jazz venue, Etobicoke’s Old Mill Inn is by no means rigid in its musical roster, often offering Pop Rock groups, occasional Roots performers and, like tonight, Blues musicians with a smooth command of their craft.

Accompanied by Juno-winning pianist and Blues songwriter Julian Fauth, tonight’s feature there, songwriter and covers artist Brian Blain, is an intelligent lyricist with a strong command of elemental, authentic rootsy Blues music who’s been a fixture on both the Blues and Folk scenes in Toronto for the past 25 years.

Blain’s music has had to compete for his talent and time with his other skills as an music journalist (he’s the longtime editor of the Toronto Blues Society’s monthly magazine and also for a time produced a monthly newsletter for Mariposa Folk Festival, as well as doing one in the Jazz community) those commitments haven’t stopped him from getting some much deserved notice for his more creative endeavours.

His songs are plain-spoken but often clever observations on life as he lives it and include a tune about the frustrations of being a Blues musician and a wry ditty about a record label he worked with. Critics unanimously note that he’s completely without affectation and that he uses no discernible effects in producing his recorded tracks, which have received thumbs up from reviewers across the U.S. and Canada.

His sense of humour can be seen in the “Colorblind Brian Blain” moniker [American spelling intentional] he sometimes uses as a kind of send-up on some of the epithets affected by or ascribed to famous Blues icons over the years. But there’s no mistaking his love of the old-time Blues feel —his “Campfire” sessions that he often incorporates into gigs demonstrate his honest passion for unadorned, from-the-gut music that both resonates and adheres to the listener.

In addition to Fauth, tonight Blain will have stellar bassist Victor Bateman (best known for his Jazz chops —but Blain has worked extensively with Jazz artists over the years as well) accompanying him for the 7:30 show in the venue’s Homesmith Bar at the 21 Old Mill Road complex nestled next to the Humber River north of Bloor St. West, not far from Jane Street. There’s no cover charge per se but a minimum $20 purchase per person is necessary in order to get a seat in this classy room. 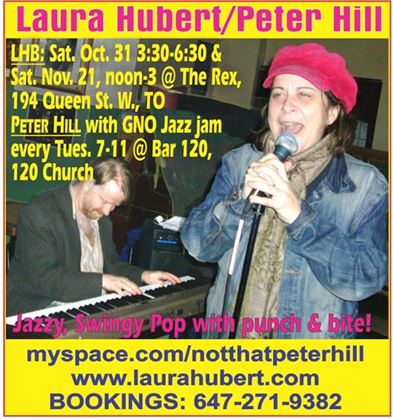