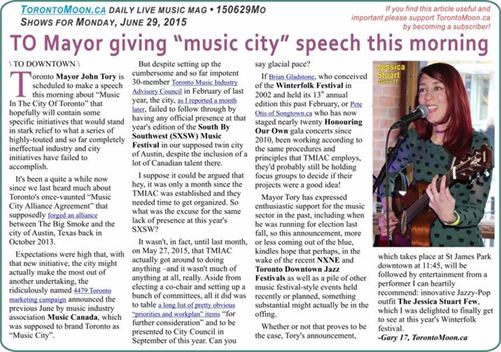 Toronto Mayor John Tory is scheduled to make a speech this morning about “Music In The City Of Toronto” that hopefully will contain some specific initiatives that would stand in stark relief to what a series of highly-touted and so far completely ineffectual industry and city initiatives have failed to accomplish.

It’s been a quite a while now since we last heard much about Toronto’s once-vaunted “Music City Alliance Agreement” that supposedly forged an alliance between The Big Smoke and the city of Austin, Texas back in October 2013.

Expectations were high that, with that new initiative, the city might actually make the most out of another undertaking, the ridiculously named 4479 Toronto marketing campaign announced the previous June by music industry association Music Canada, which was supposed to brand Toronto as “Music City”.

But despite setting up the cumbersome and so far impotent 30-member Toronto Music Industry Advisory Council in February of last year, the city, as I reported a month later, failed to follow through by having any official presence at that year’s edition of the South By Southwest (SXSW) Music Festival in our supposed twin city of Austin, despite the inclusion of a lot of Canadian talent there.

I suppose it could be argued that hey, it was only a month since the TMIAC was established and they needed time to get organized. So what was the excuse for the same lack of presence at this year’s SXSW?

It wasn’t, in fact, until last month, on May 27, 2015, that TMIAC actually got around to doing anything –and it wasn’t much of anything at all, really. Aside from electing a co-chair and setting up a bunch of committees, all it did was to table a long list of pretty obvious “priorities and workplan” items “for further consideration” and to be presented to City Council in September of this year. Can you say glacial pace?

If Brian Gladstone, who conceived of the Winterfolk Festival in 2002 and held its 13th annual edition this past February, or Pete Otis of Songtown.ca who has now staged nearly twenty Honouring Our Own gala concerts since 2010, been working according to the same procedures and principles that TMIAC employs, they’d probably still be holding focus groups to decide if their projects were a good idea!

Mayor Tory has expressed enthusiastic support for the music sector in the past, including when he was running for election last fall, so this announcement, more or less coming out of the blue, kindles hope that perhaps, in the wake of the recent NXNE and Toronto Downtown Jazz Festivals as well as a pile of other music festival-style events held recently or planned, something substantial might actually be in the offing.

Whether or not that proves to be the case, Tory’s announcement, which takes place at St James Park downtown at 11:45, will be followed by entertainment from a performer I can heartily recommend: innovative Jazzy-Pop outfit The Jessica Stuart Few, which I was delighted to finally get to see at this year’s Winterfolk festival.