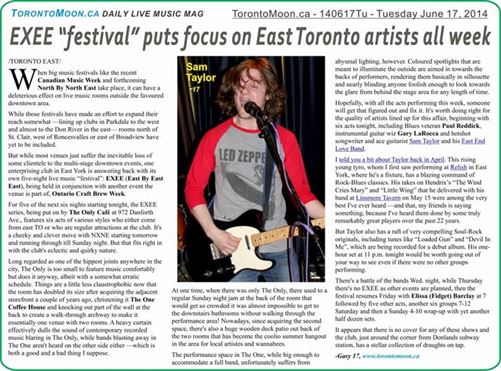 When big music festivals like the recent Canadian Music Week and forthcoming North By North East take place, it can have a deleterious effect on live music rooms outside the favoured downtown area.

While those festivals have made an effort to expand their reach somewhat —lining up clubs in Parkdale to the west and almost to the Don River in the east— rooms north of St. Clair, west of Roncesvalles or east of Broadview have yet to be included.

But while most venues just suffer the inevitable loss of some clientele to the multi-stage downtown events, one enterprising club in East York is answering back with its own five-night live music “festival”: EXEE (East By East East), being held in conjunction with another event the venue is part of, Ontario Craft Brew Week.

For five of the next six nights starting tonight, the EXEE series, being put on by The Only Café at 972 Danforth Ave., features six acts of various styles who either come from east TO or who are regular attractions at the club. It’s a cheeky and clever move with NXNE starting tomorrow and running through till Sunday night. But that fits right in with the club’s eclectic and quirky nature.

Long regarded as one of the hippest joints anywhere in the city, The Only is too small to feature music comfortably but does it anyway, albeit with a somewhat erratic schedule. Things are a little less claustrophobic now that the room has doubled its size after acquiring the adjacent storefront a couple of years ago, christening it The One Coffee House and knocking out part of the wall at the back to create a walk-through archway to make it essentially one venue with two rooms. A heavy curtain effectively dulls the sound of contemporary recorded music blaring in The Only, while bands blasting away in The One aren’t heard on the other side either —which is both a good and a bad thing I suppose.

At one time, when there was only The Only, there used to a regular Sunday night jam at the back of the room that would get so crowded it was almost impossible to get to the downstairs bathrooms without walking through the performance area! Nowadays, since acquiring the second space, there’s also a huge wooden deck patio out back of the two rooms that has become the coolio summer hangout in the area for local artistes and wannabees.

The performance space in The One, while big enough to accommodate a full band, unfortunately suffers from abysmal lighting, however. Coloured spotlights that are meant to illuminate the outside are aimed in towards the backs of performers, rendering them basically in silhouette and nearly blinding anyone foolish enough to look towards the glare from behind the stage area for any length of time.

Hopefully, with all the acts performing this week, someone will get that figured out and fix it. It’s worth doing right for the quality of artists lined up for this affair, beginning with six acts tonight, including Blues veteran Paul Reddick, instrumental guitar wiz Gary LaRocca and hotshot songwriter and ace guitarist Sam Taylor and his East End Love band .

I told you a bit about Taylor back in April. This rising young tyro, whom I first saw performing at Relish in East York, where he’s a fixture, has a blazing command of Rock-Blues classics. His takes on Hendrix’s “The Wind Cries Mary” and “Little Wing” that he delivered with his band at Linsmore Tavern on May 15 were among the very best I’ve ever heard —and that, my friends is saying something, because I’ve heard them done by some truly remarkably great players over the past 22 years.

But Taylor also has a raft of very compelling Soul-Rock originals, including tunes like “Loaded Gun” and “Devil In Me”, which are being recorded for a debut album. His one-hour set at 11 p.m. tonight would be worth going out of your way to see even if there were no other groups performing.

There’s a battle of the bands Wed. night, while Thursday there’s no EXEE as other events are planned, then the festival resumes Friday with Elissa (Fidget) Barclay at 7 followed by five other acts, another six groups 7-12 Saturday and then a Sunday 4-10 wrap-up with yet another half dozen sets.

It appears that there is no cover for any of these shows and the club, just around the corner from Donlands subway station, has a stellar collection of draughts on tap.

9> The Unseen Strangers with The Mayhemingways @ Dakota Tavern, 249 Ossington Ave., TO West