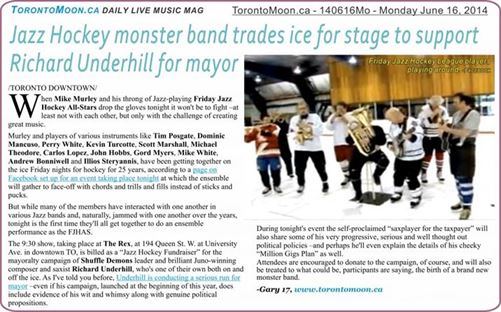 When Mike Murley and his throng of Jazz-playing Friday Jazz Hockey All-Stars drop the gloves tonight it won’t be to fight –at least not with each other, but only with the challenge of creating great music.

Murley and players of various instruments like Tim Posgate, Dominic Mancuso, Perry White, Kevin Turcotte, Scott Marshall, Michael Theodore, Carlos Lopez, John Hobbs, Gord Myers, Mike White, Andrew Bonniwell and Illios Steryannis, have been getting together on the ice Friday nights for hockey for 25 years, according to a page on Facebook set up for an event taking place tonight at which the ensemble will gather to face-off with chords and trills and fills instead of sticks and pucks.

But while many of the members have interacted with one another in various Jazz bands and, naturally, jammed with one another over the years, tonight is the first time they’ll all get together to do an ensemble performance as the FJHAS.

The 9:30 show, taking place at The Rex, at 194 Queen St. W. at University Ave. in downtown TO, is billed as a “Jazz Hockey Fundraiser” for the mayoralty campaign of Shuffle Demons leader and brilliant Juno-winning composer and saxist Richard Underhill, who’s one of their own both on and off the ice. As I’ve told you before, Underhill is conducting a serious run for mayor –even if his campaign, launched at the beginning of this year, does include evidence of his wit and whimsy along with genuine political propositions.

During tonight’s event the self-proclaimed “saxplayer for the taxpayer” will also share some of his very progressive, serious and well thought out political policies –and perhaps he’ll even explain the details of his cheeky “Million Gigs Plan” as well.

Attendees are encouraged to donate to the campaign, of course, and will also be treated to what could be, participants are saying, the birth of a brand new monster band. 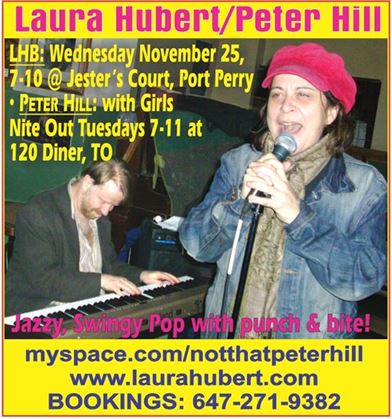