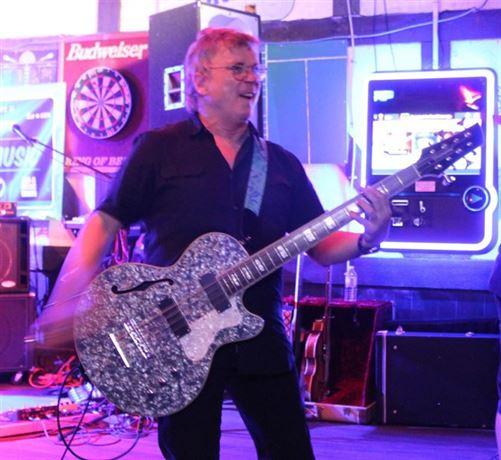 With all the sudden and somewhat distressing recent deaths of talented, iconic world-renowned musicians still in their mid sixties, not to mention other local passings, fans of GTA Pop Rock veteran David Love were thrilled last weekend to see him back in the saddle with his eponymous band after a 9-week hiatus due to his own serious health scare.

Not only has the uber-talented guitarist, bassist and singer with a penchant for Beatles-era music returned to the helm of his David Love Band and resumed his longtime role as part of the Classic Albums Live troupe (with which he also performed last week) but he has expanded his scope on the scene by joining well-established Beatles tribute band Yeah Yeah Yeah to replace a recently deceased veteran member.

But Love’s true scope as a singer and performer really comes through when he’s fronting his own project. So tonight, along with Beatles songs, there’ll be lots of other great melodic Pop Rock hits of music’s Golden Era of the 1960s on offer as his DLB (which includes versatile six-stringer Darrell McNeill and drummer Kevin Mulligan on the kit) returns to a club for which it’s a perfect fit: the Linsmore Tavern at 1298 Danforth Ave. in East York a few steps from the Greenwood subway station.

The room still has an old-school feel to it that makes it easy to feel like you’re being transported back in time, though it’s equally a good spot for indie bands (which appear every Tuesday and most Thursdays) and a wide variety of other genres and styles that make up its Friday-Saturday night lineups. (You can see all the details on the room’s very well-maintained website that not only tells you who’s playing when and how much the cover charge is, but offers great descriptions of what to expect from the groups—and this room makes a point of relentlessly getting the word out on social media as well.)

I’ve seen the DLB there a couple of times and it’s a particularly enjoyable experience not just because drinks here are quite affordable (in line with the measly $5 cover charge for tonight’s 9:30 show) and the sound and lights pretty decent, but because there’s always a throng of locals of varying ages on hand to dance and squeal and cheer, authentically re-creating the atmosphere of what it was like hearing the seminal bands of the era in the mid-size, unpretentious rooms in which they honed their craft.

And, as I’ve written before, few bands can resurrect the excitement of that magical time better than Love and his compadres. You’ll hear tunes ranging from the aforementioned Beatles catalogue and other “Mersey Beat” artists along with chart toppers and cult favourites from groups like The Yardbirds, Manfred Mann, The Monkees, Kinks and Lovin’ Spoonful along with psychedelic trippers by artists like The Byrds, Cream and Tommy James and The Shondells, to name just a few. Enjoy it while you still can my brothers and sisters —as we all have been reminded so many times recently, we never know which time will be the last time.