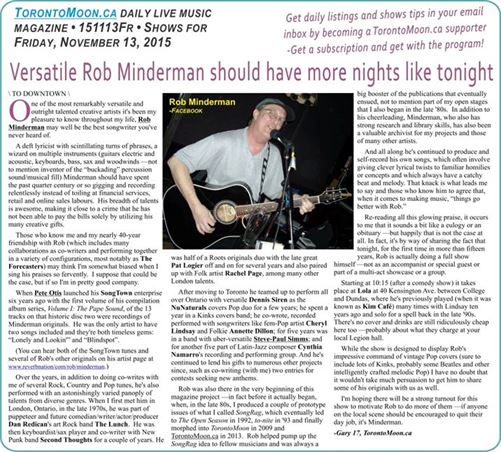 One of the most remarkably versatile and outright talented creative artists it’s been my pleasure to know throughout my life, Rob Minderman may well be the best songwriter you’ve never heard of.

A deft lyricist with scintillating turns of phrases, a wizard on multiple instruments (guitars electric and acoustic, keyboards, bass, sax and woodwinds —not to mention inventor of the “buckading” percussion sound/musical fill) Minderman should have spent the past quarter century or so gigging and recording relentlessly instead of toiling at financial services, retail and online sales labours.  His breadth of talents is awesome, making it close to a crime that he has not been able to pay the bills solely by utilizing his many creative gifts. 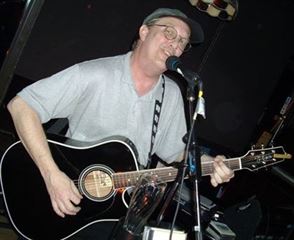 Those who know me and my nearly 40-year friendship with Rob (which includes many collaborations as co-writers and performing together in a variety of configurations, most notably as The Forecasters) may think I’m somewhat biased when I sing his praises so fervently.  I suppose that could be the case, but if so I’m in pretty good company.

When Pete Otis launched his SongTown enterprise six years ago with the first volume of his compilation album series, Volume I: The Pape Sound, of the 13 tracks on that historic disc two were recordings of Minderman originals.  He was the only artist to have two songs included and they’re both timeless gems: “Lonely and Lookin’” and “Blindspot”.

(You can hear both of the SongTown tunes and several of Rob’s other originals on his artist page at www.reverbnation/com/rob/minderman.)

Over the years, in addition to doing co-writes with me of several Rock, Country and Pop tunes, he’s also performed with an astonishingly varied panoply of talents from diverse genres. When I first met him in London, Ontario, in the late 1970s, he was part of puppeteer and future comedian/writer/actor/producer Dan Redican’s art Rock band The Lunch.  He was then keyboardist/sax player and co-writer with New Punk band Second Thoughts for a couple of years. He was half of a Roots originals duo with the late great Pat Logier off and on for several years and also paired up with Folk artist Rachel Page, among many other London talents.

After moving to Toronto he teamed up to perform all over Ontario with versatile Dennis Siren as the NuNaturals covers Pop duo for a few years; he spent a year in a Kinks covers band; he co-wrote, recorded performed with songwriters like fem-Pop artist Cheryl Lindsay and Folkie Annette Dillon; for five years was in a band with uber-versatile Steve-Paul Simms; and for another five part of Latin-Jazz composer Cynthia Namarro’s recording and performing group. And he’s continued to lend his gifts to numerous other projects since, such as co-writing (with me) two entries for contests seeking new anthems.

Rob was also there in the very beginning of this magazine project —in fact before it actually began, when, in the late 80s, I produced a couple of prototype issues of what I called SongRag, which eventually led to The Open Season in 1992, to-nite in ’93 and finally morphed into TorontoMoon in 2009 and TorontoMoon.ca in 2013.  Rob helped pump up the SongRag idea to fellow musicians and was always a big booster of the publications that eventually ensued, not to mention part of my open stages that I also began in the late ‘80s.  In addition to his cheerleading, Minderman, who also has strong research and library skills, has also been a valuable archivist for my projects and those of many other artists.

And all along he’s continued to produce and self-record his own songs, which often involve giving clever lyrical twists to familiar homilies or concepts and which always have a catchy beat and melody. That knack is what leads me to say and those who know him to agree that, when it comes to making music, “things go better with Rob.”

Re-reading all this glowing praise, it occurs to me that it sounds a bit like a eulogy or an obituary —but happily that is not the case at all. In fact, it’s by way of sharing the fact that tonight, for the first time in more than fifteen years, Rob is actually doing a full show himself —not as an accompanist or special guest or part of a multi-act showcase or a group.

Starting at 10:15 (after a comedy show) it takes place at Lola at 40 Kensington Ave. between College and Dundas, where he’s previously played (when it was known as Kim Café) many times with Lindsay ten years ago and solo for a spell back in the late ‘90s. There’s no cover and drinks are still ridiculously cheap here too —probably about what they charge at your local Legion hall.

While the show is designed to display Rob’s impressive command of vintage Pop covers (sure to include lots of Kinks, probably some Beatles and other intelligently crafted melodic Pop) I have no doubt that it wouldn’t take much persuasion to get him to share some of his originals with us as well.

I’m hoping there will be a strong turnout for this show to motivate Rob to do more of them —if anyone on the local scene should be encouraged to quit their day job, it’s Minderman. 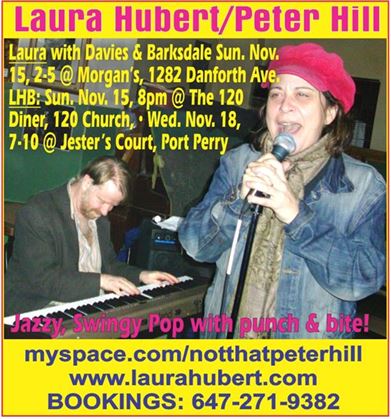