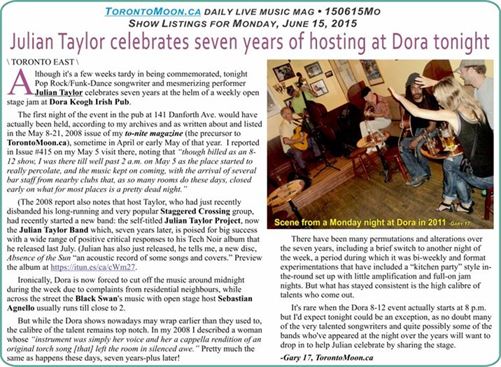 The first night of the event in the pub at 141 Danforth Ave. would have actually been held, according to my archives and as written about and listed in the May 8-21, 2008 issue of my to-nite magazine (the precursor to TorontoMoon.ca), sometime in April or early May of that year.  I reported in Issue #415 on my May 5 visit there, noting that “though billed as an 8-12 show, I was there till well past 2 a.m. on May 5 as the place started to really percolate, and the music kept on coming, with the arrival of several bar staff from nearby clubs that, as so many rooms do these days, closed early on what for most places is a pretty dead night.”

(The 2008 report also notes that host Taylor, who had just recently disbanded his long-running and very popular Staggered Crossing group, had recently started a new band: the self-titled Julian Taylor Project, now the Julian Taylor Band which, seven years later, is poised for big success with a wide range of positive critical responses to his Tech Noir album that he released last July. (Julian has also just released, he tells me, a new disc, Absence of the Sun “an acoustic record of some songs and covers.” Preview the album at https://itun.es/ca/cWm27.

Ironically, Dora is now forced to cut off the music around midnight during the week due to complaints from residential neighbours, while across the street the Black Swan’s music with open stage host Sebastian Agnello usually runs till close to 2.

But while the Dora shows nowadays may wrap earlier than they used to, the calibre of the talent remains top notch. In my 2008 I described a woman whose “instrument was simply her voice and her a cappella rendition of an original torch song [that] left the room in silenced awe.” Pretty much the same as happens these days, seven years-plus later!

There have been many permutations and alterations over the seven years, including a brief switch to another night of the week, a period during which it was bi-weekly and format experimentations that have included a “kitchen party” style in-the-round set up with little amplification and full-on jam nights. But what has stayed consistent is the high calibre of talents who come out.

It’s rare when the Dora 8-12 event actually starts at 8 p.m. but I’d expect tonight could be an exception, as no doubt many of the very talented songwriters and quite possibly some of the bands who’ve appeared at the night over the years will want to drop in to help Julian celebrate by sharing the stage.