While for many people the Great Northeast Blackout of August 14, 2021 was a traumatic experience, for others in Toronto in particular it was a welcome break from the tedium of a dog-hot summer and an incident that ended up reinforcing bonds of community rather than ripping them asunder.

This evening a group of musicians and artists in the west end will celebrate that aspect of the occurrence —which spawned many spontaneous acts of kindness, sharing, courage, coming together to party, and, no doubt, procreation— with their 14th Annual Blackout Anniversary Party at Dufferin Grove Park at 875 Dufferin Park Avenue from 7-11 p.m.

One wonders how people today, seemingly —in retrospect at least— more socially fragmented, polarized and self-centred than was the case fourteen years ago, would respond if it were to happen again today.

Most people will probably be able to clearly recall exactly where they were when the power abruptly snapped off at 4:10 p.m. on a hot August Thursday afternoon.  I was working on getting Issue #302 of my to-nite magazine uploaded to the internet on our then-extant to-nite.net site, having earlier sent the art flats to the printer for preparation of the hard-copy version.  (They were delivered by hand back then, actual physical print-outs that got photographed and put on the press.)

Obviously everything changed in that instant, and as the reality of how widespread the outage was set in via telephone and radio communications (phones, still in those days mostly landlines, still worked, and of course battery-powered transistor radios were more common then, so news was able to spread that way too) it became clear that the issue was not going to be delivered as expected.

There was nothing for it but to wait and take an impromptu vacation!  I spent a couple of days enjoying the night sky for once clearly visible from Toronto, cooking a whack of frozen foods on an improvised BBQ on the patio of the apartment I had just moved to, strummed guitar a lot, did some soft drugs and tried to make the best of it. 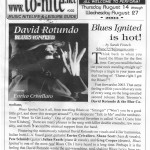 Eventually the issue did get printed, distributed and posted online and while there’s no mention of the blackout in it, a couple of articles of perhaps some historical interest caught me eye as I looked back over it whilst preparing this article.

The cover story was about edgy Blues songwriter David Rotundo’s new Blues Ignited album —he was just starting to make a breakthrough into the local Blues mainstream after being for years a somewhat marginalized act while performing and hanging out with a then also much greener Julian Fauth mostly in the Kensington Market area and a few off-the-radar west end rooms.  The album, and the review by Sarah French —now a veteran publicist, herself then just starting out as a writer in the Blues field— did a lot to help propel David to the next level.

Another story details the reunion of the late Dominic Troiano with former bandmate Robbie Lane at a gig with Robbie Lane & The Disciples at P.K. Creek in Mississauga. (The pair, along with Sonny Milne, were in a group that had release a song that hit #3 on The CHUM chart in 1962!)

Yet another piece, by Rob Minderman, glowlingly describes all the fun he had while enjoying world-class entertainment by The Rolling Stones, AC/DC et al at the “SARSstock” concert that had taken place two weeks earlier on July 30.  Yes, it was quite the momentously memorable summer!

[Subscribers who are registered with our website can read all these articles on high-resolution jpgs of the pages in a post in our Vault section.]

No doubt you have your own special memories of that summer and some of them are bound to relate to the blackout incident —hopefully happily.

If so, you can join musicians like Richard Underhill and Wayne “Neon” Smith who have indicated they’ll be among those taking part in the 8:45 p.m. parade at today’s event, followed by a 10-11 after-party with a live musical gathering.

Presumably the musical portion will be truly “unplugged” performances.  Who needs electricity when you have so much good people-energy being generated? 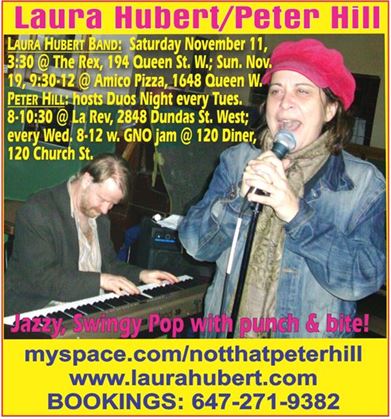 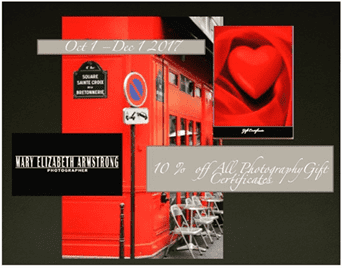