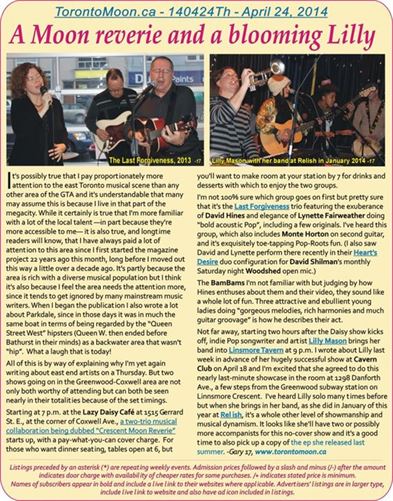 A Moon reverie and a blooming Lilly

/// It’s possibly true that I pay proportionately more attention to the east Toronto musical scene than any other area of the GTA and it’s understandable that many may assume this is because I live in that part of the megacity. While it certainly is true that I’m more familiar with a lot of the local talent –in part because they’re more accessible to me– it is also true, and longtime readers will know, that I have always paid a lot of attention to this area since I first started the magazine project 22 years ago this month, long before I moved out this way a little over a decade ago. It’s partly because the area is rich with a diverse musical population but I think it’s also because I feel the area needs the attention more, since it tends to get ignored by many mainstream music writers. When I began the publication I also wrote a lot about Parkdale, since in those days it was in much the same boat in terms of being regarded by the “Queen Street West” hipsters (Queen W. then ended before Bathurst in their minds) as a backwater area that wasn’t “hip”.  What a laugh that is today!

All of this is by way of explaining why I’m yet again writing about east end artists on a Thursday. But two shows going on in the Greenwood-Coxwell area are not only both worthy of attending but can both be seen nearly in their totalities because of the set timings.

Starting at 7 p.m. at the Lazy Daisy Café at 1515 Gerrard St. E., at the corner of Coxwell Ave., a two-trio musical collaboration being dubbed “Crescent Moon Reverie” starts up, with a pay-what-you-can cover charge.  For those who want dinner seating, tables open at 6, but you’ll want to make room at your station by 7 for drinks and desserts with which to enjoy the two groups.

I’m not 100% sure which group goes on first but pretty sure that it’s the Last Forgiveness trio featuring the exuberance of David Hines and elegance of Lynette Fairweather doing “bold acoustic Pop”, including a few originals. I’ve heard this group, which also includes Monte Horton on second guitar, and it’s exquisitely toe-tapping Pop-Roots fun. (I also saw David and Lynette perform there recently in their Heart’s Desire duo configuration for David Shilman’s monthly Saturday night Woodshed open mic.)

The BamBams I’m not familiar with but judging by how Hines enthuses about them and their video, they sound like a whole lot of fun. Three attractive and ebullient young ladies doing “gorgeous melodies, rich harmonies and much guitar groovage” is how he describes their act.

Not far away, starting two hours after the Daisy show kicks off, indie Pop songwriter and artist Lilly Mason brings her band into Linsmore Tavern at 9 p.m. I wrote about Lilly last week in advance of her hugely successful show at Cavern Club on April 18 and I’m excited that she agreed to do this nearly last-minute showcase in the room at 1298 Danforth Ave., a few steps from the Greenwood subway station on Linnsmore Crescent. I’ve heard Lilly solo many times before but when she brings in her band, as she did in January of this year at Relish, it’s a whole other level of showmanship and musical dynamism. It looks like she’ll have two or possibly more accompanists for this no-cover show and it’s a good time to also pick up a copy of the ep she released last summer.

7> Mechanical Forest Sound with Not The Wind, Not The Flag; more @ Tranzac Lounge (Tiki Lounge), 292 Brunswick Ave., TO

10> Mechanical Forest Sound with Not The Wind, Not The Flag; more @ Tranzac Lounge (Southern Cross), 292 Brunswick Ave., TO