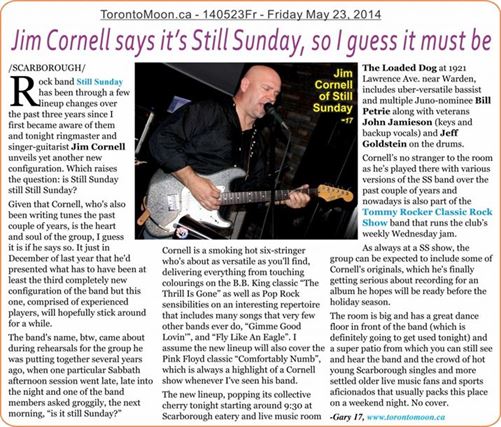 Rock band Still Sunday has been through a few lineup changes over the past three years since I first became aware of them and tonight ringmaster and singer-guitarist Jim Cornell unveils yet another new configuration. Which raises the question: is Still Sunday still Still Sunday?

Given that Cornell, who’s also been writing tunes the past couple of years, is the heart and soul of the group, I guess it is if he says so. It just in December of last year that he’d presented what has to have been at least the third completely new configuration of the band but this one, comprised of experienced players, will hopefully stick around for a while.

The band’s name, btw, came about during rehearsals for the group he was putting together several years ago, when one particular Sabbath afternoon session went late, late into the night and one of the band members asked groggily, the next morning, “is it still Sunday?”

Cornell is a smoking hot six-stringer who’s about as versatile as you’ll find, delivering everything from touching colourings on the B.B. King classic “The Thrill Is Gone” as well as Pop Rock sensibilities on an interesting repertoire that includes many songs that very few other bands ever do, such as “Gimme Good Lovin’” and “Fly Like An Eagle”. I assume the new lineup will also cover the Pink Floyd classic “Comfortably Numb”, which is always a highlight of a Cornell show whenever I’ve seen his band.

The new lineup, popping its collective cherry tonight starting around 9:30 at Scarborough eatery and live music room The Loaded Dog at 1921 Lawrence Ave. near Warden, includes uber-versatile bassist and multiple Juno-nominee Bill Petrie along with veterans John Jamieson (keys and backup vocals) and Jeff Goldstein on the drums.

Cornell’s far from a stranger to the room, as he’s played there with various versions of the SS band over the past couple of years and nowadays is also part of the Tommy Rocker Classic Rock Show jam host band that runs the club’s weekly Wednesday night jam.

As always at an SS show, the group can be expected to include some of Cornell’s originals, which he’s finally getting serious about recording for an album he hopes will be ready before the holiday season.

The room is big and has a great dance floor in front of the band (which is definitely going to get used tonight) and a super patio from which you can still see and hear the band and the crowd of hot young Scarborough singles and more settled older live music fans and sports aficionados that usually packs this place on a weekend night. No cover. 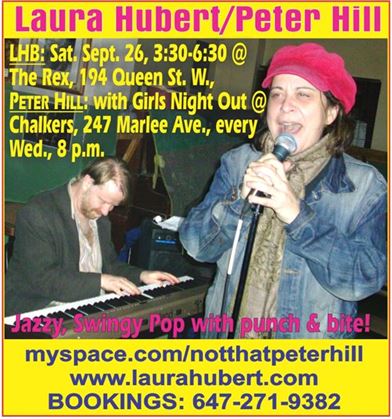