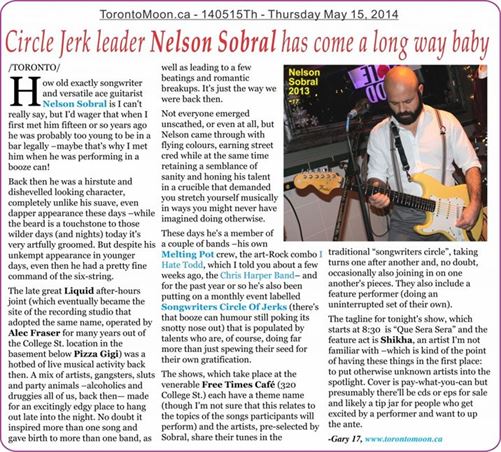 How old exactly songwriter and versatile ace guitarist Nelson Sobral is I can’t really say, but I’d wager that when I first met him fifteen or so years ago he was probably too young to be in a bar legally –maybe that’s why I met him when he was performing in a booze can!

Back then he was a hirstute and dishevelled looking character, completely unlike his suave, even dapper appearance these days –while the beard is a touchstone to those wilder days (and nights) today it’s very artfully groomed. But despite his unkempt appearance in younger days, even then he had a pretty fine command of the six-string.

The late great Liquid after-hours joint (which eventually became the site of the recording studio that adopted the same name, operated by Alec Fraser for many years out of the College St. location in the basement below Pizza Gigi) was a hotbed of live musical activity back then. A mix of artists, gangsters, sluts and party animals –alcoholics and druggies all of us, back then— made for an excitingly edgy place to hang out late into the night. No doubt it inspired more than one song and gave birth to more than one band, as well as leading to a few beatings and romantic breakups. It’s just the way we were back then.

Not everyone emerged unscathed, or even at all, but Nelson came through with flying colours, earning street cred while at the same time retaining a semblance of sanity and honing his talent in a crucible that demanded you stretch yourself musically in ways you might never have imagined doing otherwise.

These days he’s a member of a couple of bands –his own Melting Pot crew, the art-Rock combo I Hate Todd, which I told you about a few weeks ago, the Chris Harper Band– and for the past year or so he’s also been putting on a monthly event labelled Songwriters Circle Of Jerks (there’s that booze can humour still poking its snotty nose out) that is populated by talents who are, of course, doing far more than just spewing their seed for their own gratification.

The shows, which take place at the venerable Free Times Café (320 College St.) each have a theme name (though I’m not sure that this relates to the topics of the songs participants will perform) and the artists, pre-selected by Sobral, share their tunes in the traditional “songwriters circle”, taking turns one after another and, no doubt, occasionally also joining in on one another’s pieces. They also include a feature performer (doing an uninterrupted set of their own).

The tagline for tonight’s show, which starts at 8:30  is “Que Sera Sera” and the feature act is Shikha, an artist I’m not familiar with –which is kind of the point of having these things in the first place: to put otherwise unknown artists into the spotlight. Cover is pay-what-you-can but presumably there’ll be cds or eps for sale and likely a tip jar for people who get excited by a performer and want to up the ante.

9> The Wooden Horsemen @ The Local, 396 Roncesvalles Ave., TO West ~Folk/Blues