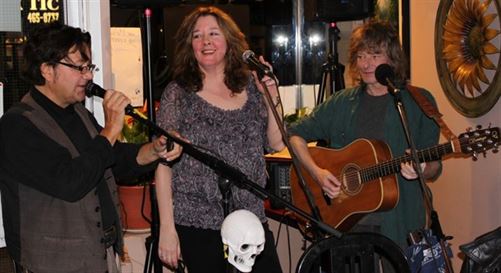 The recent accidental drowning death of Blues harmonica player and singer Robbie “The Blues Butcher” Bellmore while vacationing in Cuba has left a big hole in the hearts of many fellow TO musicians as well as those of his family and non-musical friends.

While a family funeral service was held for the ebullient and engaging fellow last week, following repatriation of his body, his musical pals also want to celebrate his life with an event of their own –actually, make that two events.

On Friday, May 16 one of Robbie’s bestest buddies, singer Colleen McCullough, who always included him in her band, The Bleeding Hearts, when he was in town and available, will commemorate Robbie’s life at her gig at Black Swan Tavern, 154 Danforth Ave. just east of Broadview.

The Swan was where Robbie hung out —indeed it was the last place I saw him, just a couple of weeks before his death— and it’s a room in which he performed numerous times over the past couple of decades.

McCullough’s band, which also includes ace guitarist Kevin Bell –another good buddy and frequent bandmate of Robbie’s in various configurations— had already had the gig booked in the upstairs lounge at the club for some time and expected Bellmore to be part of the group for the 10 p.m. show. Now the plan is to have him there in spirit by inviting numerous special guests to join the band during the night for “A Celebration of Life for Robbie Bellmore”.

Another Butcher Boy memorial show is scheduled in the same venue but on the ground floor stage for Sunday, May 26 starting at 1 p.m. More details about that when they’re available.