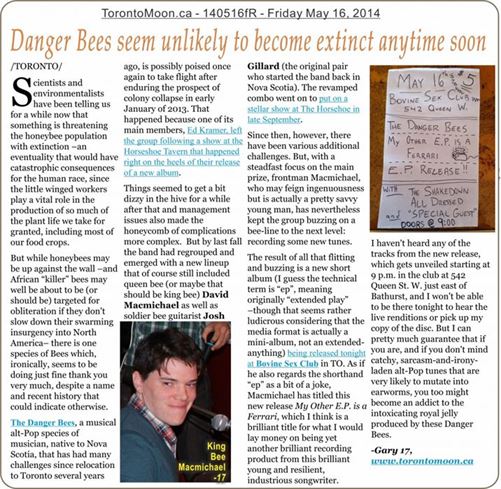 Scientists and environmentalists have been telling us for a while now that something is threatening the honeybee population with extinction –an eventuality that would have catastrophic consequences for the human race, since the little winged workers play a vital role in the production of so much of the plant life we take for granted, including most of our food crops.

But while honeybees may be up against the wall –and African “killer” bees may well be about to be (or should be) targeted for obliteration if they don’t slow down their swarming insurgency into North America– there is one species of Bees which, ironically, seems to be doing just fine thank you very much, despite a name and recent history that could indicate otherwise.

The Danger Bees, a musical alt-Pop species of musician, native to Nova Scotia, that has had many challenges since relocation to Toronto several years ago, is possibly poised once again to take flight after enduring the prospect of colony collapse in early January of 2013. That happened because one of its main members, Ed Kramer, left the group following a show at the Horseshoe Tavern that happened right on the heels of their release of a new album.

Things seemed to get a bit dizzy in the hive for a while after that and management issues also made the honeycomb of complications more complex.  But by last fall the band had regrouped and emerged with a new lineup that of course still included queen bee (or maybe that should be king bee) David Macmichael as well as soldier bee guitarist Josh Gillard (the original pair who started the band back in Nova Scotia). The revamped combo went on to put on a stellar show at The Horsehoe in late September.

Since then, however, there have been various additional challenges. But, with a steadfast focus on the main prize, frontman Macmichael, who may feign ingenuousness but is actually a pretty savvy young man, has nevertheless kept the group buzzing on a bee-line to the next level: recording some new tunes.

The result of all that flitting and buzzing is a new short album (I guess the technical term is “ep”, meaning originally “extended play” –though that seems rather ludicrous considering that the media format is actually a mini-album, not an extended-anything) being released tonight at Bovine Sex Club in TO. As if he also regards the shorthand “ep” as a bit of a joke, Macmichael has titled this new release My Other E.P. is a Ferrari, which I think is a brilliant title for what I would lay money on being yet another brilliant recording product from this brilliant young and resilient, industrious songwriter.

I haven’t heard any of the tracks from the new release, which gets unveiled starting at 9 p.m. in the club at 542 Queen St. W. just east of Bathurst, and I won’t be able to be there tonight to hear the live renditions or pick up my copy of the disc. But I can pretty much guarantee that if you are, and if you don’t mind catchy, sarcasm-and-irony-laden alt-Pop tunes that are very likely to mutate into earworms, you too might become an addict to the intoxicating royal jelly produced by these Danger Bees.